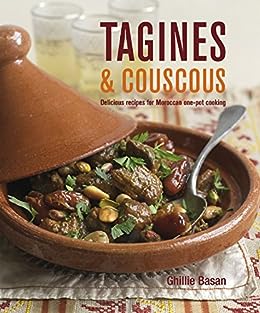 Tagines are the rich and aromatic casseroles that form the basis of traditional Moroccan cooking. These hearty one-pot meals, flavored with fragrant spices, are cooked and served from an elegant, specially designed cooking vessel, also called a tagine. In Ghillie Basan's collection of deliciously authentic recipes you will find some of the best-loved classics of the Moroccan kitchen, such as the sumptuous Lamb Tagine with Dates, Almonds, and Pistachios, and the tangy Chicken Tagine with Preserved Lemon, Green Olives, and Thyme. Also included are less traditional but equally delicious recipes for beef and fish—try Beef Tagine with Sweet Potatoes, Peas, and Ginger or a tagine of Monkfish, Potatoes, Tomatoes, and Black Olives. Substantial vegetable tagines include Baby Eggplant with Cilantro and Mint, and Butternut Squash, Shallots, Golden Raisins, and Almonds. Recipes for variations on couscous, the classic accompaniment to tagines, are also given, plus plenty of ideas for fresh-tasting salads and vegetable sides to serve alongside and complete your Moroccan-style feast.

Lushly illustrated, Tagines and Couscous is a terrific examination of Moroccan clay pot cooking. I became interested in exploring this subject after finding a lovely tagine at a garage sale. The pot was clearly unused, which made me determined to avoid following in the footsteps of the former owner.The recipes are organized by main ingredients -- lamb; Beef, Kefta,and Sausage; Chicken and Duck; Fish and Seafood; and Vegetable Tagines. There is also a chapter on Couscous and one for Salads and Vegetable side dishes. The first chapter serves as an introduction but also contains recipes for smen (aged butter,) preserved lemons, Chermoula (a Moroccan marinade,) Harissa Paste (condiment or bread may be dipped into it,) and Ras-elhanout (a spice mix.)Not including the above, there are fifty one recipes.I prepared three dishes from the book: Spicy Chicken Tagine with Apricots, Rosemary and Ginger; Tagine of Yam, Shallots, Carrots, and Prunes; and Plain, Buttery Couscous. The recipes turned out perfectly, and I particularly liked the tangy Yam tagine and the Buttery Couscous was amazing. I will definitely prepare both dishes again.The cookbook is printed on quality paper so, if done promptly, spills wipe up without a trace. There is a color photograph of each dish but no nutritional information is provided. The ink color is black, which normally makes reading a bit easier than pale colors, but the font size used for the ingredient lists and instructions is quite small and hard to read, especially while the book is laying open on a countertop while preparing a recipe. I had to keep bending down to read the instructions. My guess is the print size is approximately 8 point.