Free Downloads
The Shakespeare Thefts: In Search Of The First Folios 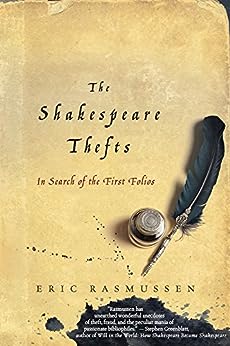 The first edition of Shakespeare's collected works, the First Folio, published in 1623, is one of the most valuable books in the world and has historically proven to be an attractive target for thieves. Of the 160 First Folios listed in a census of 1902, 14 were subsequently stolen-and only two of these were ever recovered. In his efforts to catalog all these precious First Folios, renowned Shakespeare scholar Eric Rasmussen embarked on a riveting journey around the globe, involving run-ins with heavily tattooed criminal street gangs in Tokyo, bizarre visits with eccentric, reclusive billionaires, and intense battles of wills with secretive librarians. He explores the intrigue surrounding the Earl of Pembroke, arguably Shakespeare's boyfriend, to whom the First Folio is dedicated and whose personal copy is still missing. He investigates the uncanny sequence of events in which a wealthy East Coast couple drowned in a boating accident and the next week their First Folio appeared for sale in Kansas. We hear about Folios that were censored, the pages ripped out of them, about a volume that was marked in red paint-or is it blood?-on every page; and of yet another that has a bullet lodged in its pages. Part literary detective story, part Shakespearean lore, The Shakespeare Thefts will charm the Bard's many fans.

This is an entertaining and well-written book that will be appreciated by Shakespeare lovers and bibliophiles. It details the provenance of many of the 232 extant copies of the first folio of Shakespeare's plays. It focuses on the work of a team trying to update the list of these first folios. There is a particular emphasis on the history of the theft and recovery of many of these books. The book also contains many interesting tidbits of information. For instance, there is a discussion of how these folios are protected and how they should be handled. Contrary to what is often shown on TV, where rare books are handled with gloves, this is not necessary for these folios, and can be harmful to them. These books are printed on paper made from linen rags, which do not have to be protected from the grease of one's fingers, so gloves are not required, as they are with books printed on paper made from wood pulp. In fact, wearing gloves can damage the book as gloves make it difficult to turn the pages, possibly resulting their being bent. The book also contains an appendix that discusses early seventeenth century printing and the making of this first folio. The published version of this book will contain illustrations and index, which are not included in this for-review copy, so I cannot judge the quality of these items.While I liked this book I cannot give it five-stars. The book is quite episodic and repetitive in some places. It also tended to go off on tangents, which I found interesting, but sometimes they caused me to lose track of the narrative. For instance, there is mention that one of the folios is reported to have red stained pages, which could be blood.

This was a fun, fast book to read. The focus is on the information documented by the author, Eric Rasmussen, and his bibliophile team, while putting together an ultimate guide to all known copies of the Shakespeare's First Folio. The First Folio is actually titled "Mr. William Shakespeares Comedies, Histories, & Tragedies, Published According to the True Originall Copies", in 1623.This book isn't the ultimate guide, this is a fun overview of the strange trips some of the First Folios have taken. One of the "problems" with the First Folio is that it's been a collector's item for three centuries, and VERY monetarily valuable for over a century. So private collections and museum collections have, until relatively recently, almost routinely sold off, lost through theft, or simply lost, their First Folios. And that doesn't count the First Folios which were thrown away when a newer & better version was published. Even places you'd think would know better (in hindsight) fell to this. For example, Oxford's renowned Bodleian Library sold it's First Folio in 1664 when it they replaced it with a new copy of Shakespeare's plays - the Third Folio.Rasmussen has entertaining tales of the known rogues who absconded, sometimes successfully, with first editions. There are some First Folios whose provenances are known from the original purchaser in the early 16th century. More frequently, though, Rasmussen tells us of library inventories in one century that are missing a First Folio listed in a prior century.We don't know for sure how many First Folios were printed; the educated guess is 750. There are only 232 documented folios still in existence. So finding a First Folio in your great-aunt's attic is certainly possible if you go just by the numbers.