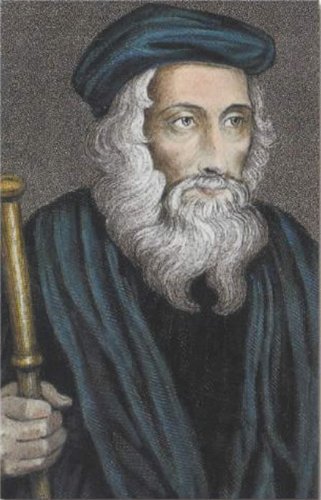 This is a fascinating book - the new testament translated into the English of Chaucer's time. It is surprisingly easy to read, and has great charm. Sadly though the Kindle edition has no interactive index, so that it is impossible to go straight to a chosen chapter, or even book, of the new testament. Perhaps the publishers could reissue this useful work with an index included?

Wycliffe was writing in fourteenth-century Chaucerian English. If you know the New Testament, you will be able to follow the translation with little trouble and will not have to spend a lot of time checking vocabulary in a Middle English glossary. The only problem areas will be because Wycliffe was translating Jerome's Latin translation of the original Greek text, but the resulting deviations are not frequent. The language is of a simple, straightforward elegance which is pleasing: I smile often at a happy turn of phrase. Fourteenth-century English was at an interesting point in the development of the language. Many Anglo-Norman words, since lost, were still current: "sue" was the normal word for "follow." And forms of the same word, now of divergent meaning, were still semantically associated: "deem" meant "judge." and "doom" meant "judgment," whether good or bad. Nigh, near, and next were the positive, comparative, and superlative of the same adjective; a neighbor was some one who lived nearby, and to nigh was to draw near.

I appreciate being able to read books, rare and hiostoric that I could not before the Kindle era. But whenever I come across certain spellings/wordings, I do wonder if it reflects the original, or is it an error in the electronic text?