Free Downloads
War Hero: The Unlikely Story Of A Stray Dog, An American Soldier And The Battle Of Their Lives (Kindle Single) 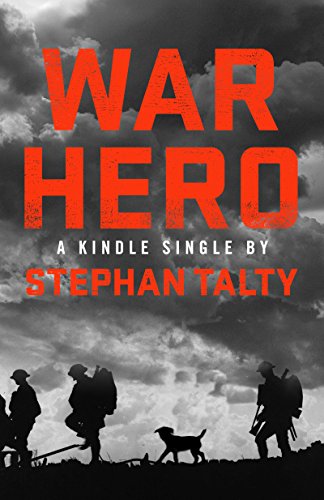 The dramatic and heartfelt story of the Great War's most unlikely hero – a Parisian stray dog named Rags.On a July evening in 1918, four brutal years into World War I, a young American soldier, private James Donovan, stumbled on a pile of rags while lost on the pitch-black the streets of Paris. Unbeknownst to Donovan, the little terrier he found hiding under the bundle that night would go on to save the lives of countless American soldiers on the battlefields of France and change the way wars are fought. In "War Hero," acclaimed historian Stephan Talty (author of A Captain's Duty) tells an unforgettable tale of friendship, loyalty and survival set against the carnage of the Great War.Rags’ exploits made him famous back in America, where he became one of the inspirations for the modern “war dog.” He led parades down Broadway, accepted a handful of medals and became more popular than some 5-star generals. But it’s a private story that's at the heart of "War Hero": the unbreakable bond formed between a homesick soldier and a Parisian mutt who had no place in the world until he found one in the trenches of the Meuse-Argonne.Stephan Talty is the author of two previous bestselling Singles, The Secret Agent and Operation Cowboy. His writing has been published in the New York Times, GQ, the Irish Times and Men's Journal. His most recent book is Under the Same Sky: From Starvation in North Korea to Salvation in America.Cover design by Adil Dara.

Author Stephan Talty has a knack for writing stories about animals in wartime. In a previous story, he described an incredible mission in World War II to save the Lippizaner horses in Europe (Operation Cowboy: The Secret American Mission to Save the World's Most Beautiful Horses in the Last Days of World War II). Now he's back with another stranger-than-fiction story, this time about Rags, a terrier who was the First Infantry Division's mascot in World War I. From the improbable way that young soldier James Donovan met and adopted Rags through the Battle of the Meuse-Argonne, where Rags became a hero who saved many American lives, it's an amazing story that reads like fiction, but it's all true. I know because I checked the story in several references.One of the most essential links on the battlefield was the one between infantry and artillery, and Sergeant Donovan of the First Division's Signal Corps taught Rags to keep it open when human technologies had failed. Acting as a runner when the phone lines were cut by German artillery, Rags carried vital messages from the beleaguered infantry back to artillery units. Like the soldiers he served, Rags even wore a gas mask during gas attacks. He even once parachuted to safety from an observation balloon that was shot down. Rags worked diligently up until the day he and Sergeant Donovan were both seriously wounded and had to be evacuated, ending his wartime career.It's a heartwarming and inspiring story of Rags, the little terrier who proved that dogs are a man's best friend.

I bought this more because I'm a war buff than anything else. But I gotta admit, that little terrier named 'Rags' won me over after about 5 minutes of reading. Terrific read for history lovers and animal lovers alike!

This was an great story about a soldier and a dog. I was not one to study history but reading a well written accounts like this, gives you not just a "good read" but also an excellent history lesson!!

If you are looking for a quick, short read on your next business trip or long weekend, I would highly recommend War Hero. This is a very light piece of literature that steers clear of any deep or difficult topics. It is simply a nice story about a soldier and his adopted dog set during the dramatic and harrowing period of ww1 1917 in war torn France. Talty plays a little loose with historical facts (Patton wasn't a General in ww1 for example, he was a newly minted Army Captain) but it doesn't diminish the heartwarming tale of Rags the soldier dog and his adopted owner Sgt. James Donovan.Read it. Enjoy it. Go to bed with a smile on your face. :)

This is the third book of Stephan's that I've read. He's a great storyteller.If your a dog lover, this is a must read. If your a history buff, this is must read.

Great book. Heart warming about a solider and a stray dog he comes across in the streets of Paris. A bonding between this street dog and the whole 1st division of the American Army during WW1. From a priviate to the commanding general of the 1st Division, Rags won the hearts of all for his caring attitude to his great bravery. A good fast read.

I loved this book!! It is so well written and I held my breath several times when it seemed they might not survive. I recommended it to my family and they all loved it too. If you haven't read this book, I highly recommend you do so. It's so good!!!