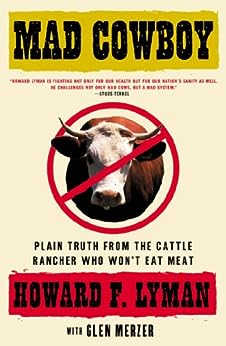 Told by the man who kicked off the infamous lawsuit between Oprah and the cattlemen, Mad Cowboy is an impassioned account of the highly dangerous practices of the cattle and dairy industries.Howard Lyman's testimony on The Oprah Winfrey Show revealed the deadly impact of the livestock industry on our well-being. It not only led to Oprah's declaration that she'd never eat a burger again, it sent shock waves through a concerned and vulnerable public. A fourth-generation Montana rancher, Lyman investigated the use of chemicals in agriculture after developing a spinal tumor that nearly paralyzed him. Now a vegetarian, he blasts through the propaganda of beef and dairy interests—and the government agencies that protect them—to expose an animal-based diet as the primary cause of cancer, heart disease, and obesity in this country. He warns that the livestock industry is repeating the mistakes that led to Mad Cow disease in England while simultaneously causing serious damage to the environment. Persuasive, straightforward, and full of the down-home good humor and optimism of a son of the soil, Mad Cowboy is both an inspirational story of personal transformation and a convincing call to action for a plant-based diet—for the good of the planet and the health of us all.

I truly believe that everyone should be informed, particularly with regards to what they are placing in their mouths, and this is an excellent, easy-to-read personal account that does just that. Howard Lyman, a fourth generation cattle rancher, blows some of the common misconceptions and agribusiness propaganda right out the window in this straight forward and, at times, humorous expose that comes, so to speak, straight from the horses mouth.Lyman doesn't waste any time in getting right to the gritty, gruesome details behind the highly politicized business of food production. Within the opening pages, he informs us that cattle, chickens, and pigs are fed "protein concentrates" consisting of euthanized pets, ground up diseased farm animals, fecal matter, and roadkill. Not only are fodder animals being fed this vomit-inducing mixture, but our pets are as well. Yummy!Lyman spends a good amount of time discussing the impact that the aforementioned practice could have on America's potential to see "Mad Cow Disease" effecting people in the not-so-distant future, which has been a steadily increasing problem in Britain. He points out several studies that debunk the myth that spongiform encephalopathy cannot jump species barriers.In addition to the Mad Cow and Downed Cow issues, Lyman brings up the issue of rBGH (recombinant bovine growth hormone) used to increase milk production in cows and the possible effects this could have on human health. To combat the mastitis that develops from the use of rBGH, cows are given antibiotics that are then passed to the dairy consumer in various milk products. With the increased use of antibiotics comes increased bacterial resistance to antibiotics.

My family has been farming in America for 150 years; I was born and raised on the family farm in Ky. I was taught at an early age to kill animals with a gun, for no reason. My grandfather had a large dairy farm and a massive pig operation for 50 years of his life; I partook in the torture and slaughter of animals for meat consumption. We then switched to grain farming, and I was involved with massive spraying of highly toxic chemicals on the food that YOU eat every day. My father was a Microbiologist, I witnessed the slaughter and torture of innocent animals for experiments, and their suffering was burned into my memory. I took a tour of a pig slaughter house one time, it was not a pretty sight, the animals were dismembered while alive with large hydraulic cutting tools, blood flowed like rivers inside that house of horrors. I watched our neighbor, a cattle rancher, clear one of the last remaining stands of virgin timber in the state of Kentucky; he did it to graze his cattle on. I have driven across the US and seen the massive feedlots, which Howard describes in his book. We have a rendering plant up the road, if you like hamburgers, that is not a place you want to go or smell.I became very sick one day while in the United States Navy; I was exposed to radiation while working around reactors. A lot of it also had to do with my diet; I was a fast food junkie, 6' tall and 125 pounds. I suffered for 14 years with major health complications; it eventually cost me my career and my wife and child. I was diagnosed with a lung disease, a digestive disease, loss of partial vision, Scoliosis of the spine, blood in my urinary track and an endless list of severe symptoms. One day, I got tired of being sick, and I knew I was dying.