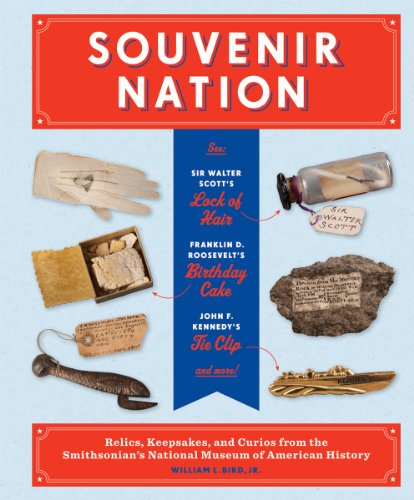 Buried within the collection of the Smithsonian Institution's National Museum of American History exists an astonishing group of historical relics from the pre-Revolutionary War era to the present day, many of which have never been on display. Donated to the museum by generations of souvenir collectors, these ordinary objects of extraordinary circumstance all have amazing tales to tell about their roles in American history. Souvenir Nation presents fifty of the museum's most eccentric items. Objects include a chunk broken off Plymouth Rock; a lock of Andrew Jackson's hair; a dish towel used as the flag of truce to end the Civil War; the microphones used by FDR for his Fireside Chats; and the chairs that seated Nixon and Kennedy in their 1960 television debate.

William Bird's SOUVENIR NATION is an appealing look at American history, specifically RELICS, KEEPSAKES AND CURIOS FROM THE SMITHSONIAN'S NATIONAL MUSEUM OF AMERICAN HISTORY. Bird examines over 50 such 'souvenirs,' detailing their history and how they came to find a home at the Smithsonian. A 2013 Princeton Architectural Press release, SOUVENIR NATION is a wonderfully entertaining journey through our history, "revealing who we are through the things we have saved."Bird divides his topic into broad chapters such as 'The Cause of Freedom,' 'The Immortal (George) Washington,' 'Foreign Guests,' 'Presidential Pieces,' etc. Each object gets a one-page write-up with an accompanying, color photograph on the facing page. Included are such fascinating items as a piece of the original Plymouth Rock, a cane made from a floor joist from Independence Hall, a Washington Monument cornerstone fragment, a napkin used by Napoleon, a vase made from a USS Constitution timber, the table and chairs used by Lee and Grant at Appomattox, a framed lock of Andrew Jackson's hair, FDR's Fireside Chat microphones, a JFK PT-109 tie-clip and so on.I greatly enjoyed SOUVENIR NATION. Reading about how those 50-odd relics originated and then, eventually, ended up at the Smithsonian made for fascinating reading. And, seeing them in full-color is a hoot. William Bird's book is an educational - and fun - survey of one (small) part of American history. Recommended.

Anybody who thinks history is boring should read this super-fun book. The title echo of Sarah Vowell's Assassination Vacation is deliberate, I suspect, since both books share the same viewpoint that history is endlessly fascinating and often humorous. The eccentric objects in this book bring even old history lessons to life with panache and style. Great summer reading, especially for a trip to D.C., especially to our nation's attic, the Smithsonian, where all these odd curios seem to come out in the wash.

I really enjoyed this tour of the nation's attic. It is also interesting what a rocky start the collection endured, since it has been such a jewel during our lifetimes. As the title says, seeing the color pictures of each item is necessary. That is the point of mementos, getting to see it oneself, if one cannot touch.

This book is a light and very enjoyable read. The collecting of souvenirs has always been a tradition by people everywhere and throughout time. The best point of view with this book is showing how to legitimize such collecting by doing basic academic research to flesh out the meraning of the various objects., especially understanding them in the historical context.

It is worth while to read what we have saved and why we have saved these items. The past is important so we will know how to react in the future.

Good quick read on some unusual items from many sources. Nothing deep and detailed. It is amazing what we value as historic