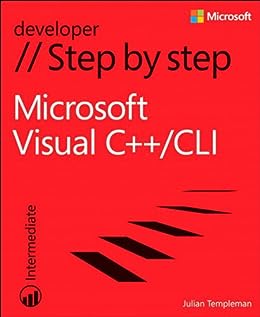 Your hands-on guide to Visual C++/CLI fundamentals Expand your expertise—and teach yourself the fundamentals of the Microsoft Visual C++/CLI language. If you have previous programming experience but are new to Visual C++, this tutorial delivers the step-by-step guidance and coding exercises you need to master core topics and techniques. Discover how to: Write and debug object-oriented C++ programs in Visual Studio 2012 Utilize the various features of the C++/CLI language Make use of the Microsoft .NET Framework Class Library Create a simple Windows Store app Use .NET features such as properties, delegates and events Access data from disparate sources using ADO.NET Create and consume web services using Windows Communication Foundation Work effectively with legacy code and COM

I've learned C/C++ few years ago, but I didn't used since. As my work and knowledge evolves, and with the support of C++/CLI within Windows Store and Windows Phone apps, I thought it was a good time to re-learn C++ and really get my hands on C++/CLI.If you want to learn C++ "for .net platform" for the first time, or already know either c++ or .net, this book is recommended. C++ can be a "scary" language, but well-sized chapters and clear and simple explanations of this book make the learning of this language a pleasure.If you want to learn "pure"/standard c++, this book may not be for you, as differences between standard c++ and c++/cli are not really explained/detailed/mentioned.There is mainly three parts: the first one is about learning c++ language syntax. In 8 chapters, you'll learn the bases of any programming languages (variables, functions, loops & controls statements), and controlling your program's memory (one thing really important in c++).The second part introduces you to the .net programming. As a seasoned .net developer, I've read it quite quiclky, but the content was still relevant and interesting. There are subtle differences in the way of doing the same things between c++ and C#. The third one is about common scenarios, like working with the file system, xml files and databases, creating a WCF service or making Windows Store apps. This last part is not really exhaustive. If you want to build Windows Store apps with C++, this book only will not provide you enough info (just what's needed to start developing a simple app, but nothing about integrating with the OS features, etc...).Visual C++/CLI Step by step was a great reading for start writing C++ code for the .net world. I think I'll read it again, as a reference book (through the index and/or the chapters) when I'll develop my first real-world app with C++/CLI.

Good for programming syntax, but not for creating windows application. It would be great if there are context about programming with form & controls.

I chose this book in particular because I already knew some basics of C++ but wanted to get a full understanding of the language while learning how to use it efficiently on the Windows platform specifically. I finished the first four chapters within my first hour reading this, and had no trouble with the instructions once so ever. I am using the same version of Visual Studio (2012) as used in the book which makes creating projects and following exact procedures quite easy. I recommend this book to anybody who has a thorough foundation in basic programming such as Python, as the author assumes you already know how variables, operators, and other basics work. I'm glad I bought this and look forward to learning the full .NET C++.

There is a lot of information in this book. It includes a lot of the needed items.