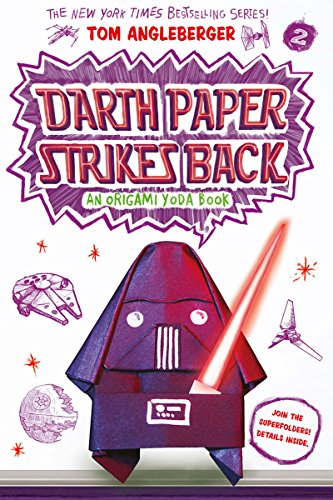 It is a dark time at Ralph McQuarrie Middle School. After suffering several Origami Yoda–related humiliations, Harvey manages to get Dwight suspended from school for being a “troublemaker.” Origami Yoda pleads with Tommy and Kellen to save Dwight by making a new case file—one that will show how Dwight’s presence benefits McQuarrie. With the help of their friends, Tommy and Kellen record cases such as “Origami Yoda and the Pre-eaten Wiener,” “Origami Yoda and the Exploding Pizza Bagels,” and “Origami Yoda and Wonderland: The Musical.” But Harvey and his Darth Paper puppet have a secret plan that could make Dwight’s suspension permanent . . . With his proven knack for humorously exploring the intrigues, fads, and dramas of middle school, Tom Angleberger has crafted a worthy sequel to his breakout bestseller.

I like this better than "Origami Yoda."On the one hand, "Origami Yoda" was so original, and this book follows the same pattern, so it's not quite as amazingly creative. But the problems Origami Yoda helps to solve in this book, and the mystery of how the advice turns out, are still unusual, fun, and interesting for my kids. And the problems are personal; Yoda/Dwight shows insight and gentleness in his solutions. Like "Origami Yoda", this book has a case study/interviewing format with doodles and comments written in the margins that make it even more entertaining.Instructions for making an "emergency" 5-fold origami Yoda and for making Darth Paper are at the end of this book. Excellent. It's like a bunch of happy folding maniacs around here right now.Parent Note: One very bright note in this book is the absence of most of the bad language from "Origami Yoda." I found a few instances: "shove it" (~3 times), some vulgar language replaced with "*$^#", "jerk", and "OMG" in inititals (twice). I'm raising a family of boys with ages all the way down to 6 years old -- I'm picky about what language the little ones hear.The Quikpick shows up in this book. Nice! If your family likes this, also try "The Qwikpick Adventure Society" by Sam Riddleburger.(Yes, I know.)

I bought this book on Saturday for my 10yr. old son who is an avid fan of Star Wars and had already read The Strange Case of the Origami Yoda. This is the first book he has ever finished in 1 day! He kept telling me over and over again about how good it was and thanking me for buying it for him. He says he is going to reread it again right away. He is anxious for the next book and asked if I thought it would be out before Christmas.

Bought for our son. He is 13 years old and loved it.

This is a review from a kid and his mom;I liked how Harvey was really evil, like Darth Paper evil. And also how all the girls, when they saw Harvey's Darth Paper Origami they said, 'oh, he's so tiny! Can you make me a pink one?' This book is pretty funny, but also, there is an adventure here because they have to try and save Dwight. Yoda said, 'make a new case file you must, the only way to save Dwight, that is.' Yoda is in this book in each chapter and he gives advice to people that is really cool.People should read this book, but they should read the first book, first, it is called The Strange Case of Origami Yoda. People should also read this because it is the second book in the series and it is kinda like a diary, only they call it a case file instead.The main thing that they have to do is they have to save Dwight from going to some school for really, really, really bad kids. Tommy, the main character, thinks he might get beat up there, which would be super awful.Mom's review;I kept walking past his room, smiling because I heard him giggling as he flipped the pages. There was no whining about playing a computer game or watching TV, he was pretty content to lounge in bed, reading. I don't think he's had this much fun reading a book since he read the Percy Jackson series. Definitely worth buying this in hardcover instead of borrowing it from the library, because he's read it about three times now. Some other books he's liked, just to add a little perspective, Gregor the Overlander, Holes, George's Marvelous Medicine, The Spiderwick Chronicles, Harry Potter, Captain Underpants, Bionicle books, The Wizard of Oz and Garfield comics.

Let me cut to the chase. I'm a #kidlit blogger and this is a book I'm putting on our "Books Boys Love" list, because this is a book, that in my opinion, is just as entertaining and appealing to children as the Wimpy Kid series.It's written at the mid-4th grade level (Accelerated Reading).Great book. I found it a satisfying read (and now my children are running around with paper Yodas :).Buy it, you should.Pam T~mom/kidlit blogger

My 9 year old LOVED this book (as well as the Yoda book naturally). Of course he is a big time Star Wars fan, and combined with the fact he likes origami too, it was a natural fit.My 13 year old also plans to read this--which is a testament to the broad appeal (they usually DON'T read the same books).My youngest on the other hand has been obsessed with Septimus Heap of late, but as soon as Darth Paper showed up he immediately put Septimus on hold and polished off Darth Paper instead.He loves the characters, and finds the whole thing immensely amusing and entertaining and he would like more please.My son has turned into quite the voracious reader over the last year and one of the early books that seemed to get him involved was the original Origami Yoda (don't get me wrong, there were plenty of books involved, but OY was definitely one of them). It was great to see the follow on book and realize how much he has progressed over the last year.Very Highly Recommended (particularly for any reluctant readers who happen to love Star Wars!).JTG