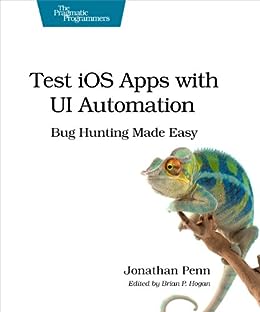 If you're an iOS developer or QA professional tapping through an app to reproduce bugs or performance issues you thought were solved two releases ago, then this is your book. Learn how to script the user interface, assert correct behavior, stub external dependencies, reproduce performance problems, organize test code for the long haul, and automate the whole process so the machine does the work. You'll walk through a comprehensive strategy with techniques using Apple's tools that you can apply to your own apps.Automated user interface testing is an important part of a comprehensive testing strategy for iOS applications. By scrutinizing your app through the eyes and actions of the user, you raise confidence that features are wired up right and behave as you expect.Through this book you'll learn how to do full-stack testing of your iOS apps in both the simulator and on the device with Apple's built-in tools. You'll write behavioral tests in UI Automation that help protect against regressions. You'll write scripts to repeat steps in Instruments to reproduce performance bugs. With a little ingenuity, you'll build a workflow that gives the feedback you need.Grow a test suite by working with a real application that uses Core Data and network requests. Learn how to describe expected behavior in test scripts, launch the app in a specific state, and stub external dependencies for completely isolated and repeatable tests. Along the way, you'll practice how to organize your test code and run it hands-free from the command line. By the end, you'll have the tools and habits you need to tackle the unique testing problems you'll face while building best-of-breed native iOS apps for your users.What You NeedYou'll need a Mac running at least Mac OS X Lion (10.7) and Xcode 4.6.

This book has made creating iOS Automation scripts much easier than it would have been with the Apple Instruments User Guide alone. Although, I do think reading the Apple Instruments User Guide is worthwhile. The Instruments User Guide gives you a nice overview of Instruments, but does not come close to the information this book provides on UI automation. I also recommend checking out the Apple UI Automation JavaScript Reference. At least breeze through it to get an idea of what it contains.The book starts off by jumping right into capturing a script from the simulator and provides a nice overview of the Instrument's trace-document window.Then Chapter 2 jumps right in to creating automated acceptance-test scripts using JavaScript, which is the language used for UI Automation.One thing I must admit is that because of the book's size I really underestimated how valuable the information would be and how many topics would be covered. I normally only list the chapter to give you an idea of what the book covers, but for this review I have also include the sections in each chapter.Chapter 1: UI Automation Overview1.1 Capturing Our First Script from the Simulator1.2 Finding Our Way around UI AutomationChapter 2: Testing Behavior with UI Automation2.1 Talking to the UI through JavaScript2.2 Reporting Errors2.3 Verifying that the Test Does What It SaysChapter 3: Building a Test Suite3.1 Testing with a Modal Alert View3.2 Importing Script Files at Runtime3.3 Testing Results from a Live API3.4 Grouping Test Steps and Their OutputChapter 4: Organizing Test Code4.1 Starting a JavaScript Toolbox4.2 Describing the App with Screen Objects4.