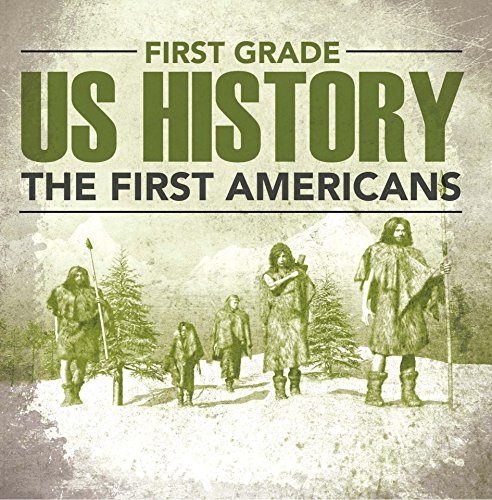 First graders use their imaginations a lot so it's best to introduce visual learning. This book is a complement to your child's traditional school textbook. Since it is composed of bold images laid out in an easy-to-understand format, it will definitely attract and keep the attention. Don't forget to grab a copy of this book today!

First Grade US History: the first Americans. Warning this review contains spoilers. This book is entirely about the Paleo Indians, who were the first inhabitants of North America. I think this book is educational. There are many good facts within this book. This book does contain a few pictures. However since they are computer generated (there were no cameras back then) they didn’t capture my kid’s attention. I was even bored with the pictures. Overall it is worth the read and a good starting point in exploring the pre historic people who inhabited North America. This book starts out letting us know that the name given to them is just a classification for the first people who entered the American continents. We are told where they came from and how they got here. It is un known exactly when they first started coming over here from Asia. The book makes this fact clear by stating that they came at least 13,000 years ago, but perhaps they came much earlier. I think this is good, because it lets first graders know there are still unknowns. I wish when they introduce words like nomad, that they define it. They do describe the Paleo Indians as hunter, gathers. I like that we are told what animals they hunted. I know that this is evidenced in the fossil record. There are many good facts in this book. We learn that they used stone tools. It is great that we are told how the tools were used. They used projectile points to hunt. It would be nice to give an example of a projectile point like an arrowhead, or spear point for those who may not be familiar with the term. They discuss that they traveled in tribes carrying their belongings with them. This book tells how since they were here during the late ice age that climate changes caused them to have to move.