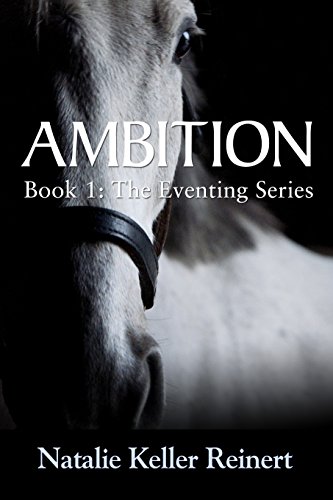 "Natalie weaves the story of Jules, her horses, and their uncertain road to the upper levels of eventing with realism and detail." - The Equine Insider" 'Ambition' is one of the good ones." - Susannah St. Clair (Vine Voice Reviewer)"This all felt very real to me." - Karen McGoldrickJules Thornton didn’t come to Ocala to make friends. She came to make a name for herself. Young, determined, and tough as nails, she’s been swapping stable-work for saddle-time since she was a little kid - and it hasn’t always been a fun ride. Forever the struggling rider in a sport for the wealthy, all Jules has on her side is talent and ambition. She’s certain all she needs to succeed are good horses, but will the eventing world agree?On her own at last, Jules is positive she’s poised to become eventing’s newest star, but soon finds she’s making more enemies than friends in the close-knit equestrian community. Little mistakes cost big -- her students are losing faith in her; her owners are starting to pull their horses. And then there’s the small matter of Peter Morrison, the handsome, on-the-rise event rider who keeps showing up when she least expects him. Jules is convinced that all she needs is good horses -- not friends, not romance, not anyone’s nose in her business. But it’s just the beginning of the long, hot, Ocala summer, and as Jules tumbles through the highs and lows of a life with horses, she might find she’ll need help after all to weather the coming storm.In the equestrian literary tradition of Jane Smiley (Horse Heaven) and Sara Gruen (Riding Lessons, Water for Elephants), Natalie Keller Reinert takes readers into the riding life as only a horsewoman can.

I have a weakness for any good books about animals but especially about horses but that being said… they have to be good. “Ambition” is one of the good ones. The fact that I have been a horsewoman for most of my life and recognize when the language is true makes a lot of books not so good and others.. excellent but here, the characters and the story are both great. I admit that there were times when I wanted to reach into the pages of the book and “slap” Natalie’s main character, Jules. There are couple of things that I think should have been addressed such as why when Becky , Jules’s groom and riding student gets fed up and leaves, she never just faces her and asks her why? Jules also whines… a lot.(Hence the imaginary slap) . Yes things were hard for her as a kid trying to become the rider she wanted to be but she has so far, done a decent job of it so quit already. I also love the horsey “characters”, Dynamo who actually belongs to her and her , she hopes he will become, claim to fame: Micky. Both thoroughbreds and both off the race track. In Micky, she really finds a mystery that for a long while defies an answer making his training almost impossible . Enter Peter, well, yep, you can see how this would happen but Jules fights the growing interest she has in him and he in her also because she doesn’t want any distractions and no male horse trainer trying to tell her what to do. It is an interesting read up to here but around this part of the book, Natalie puts the story into a full hands on gallop . Enter a new character, a hurricane with a chance of a tornado ! Jules lives in a cracker box double wide. The barn where her boarders and horses in training are is no spring chicken and this monster storm is heading directly for them. Believe me, I couldn’t read fast enough!