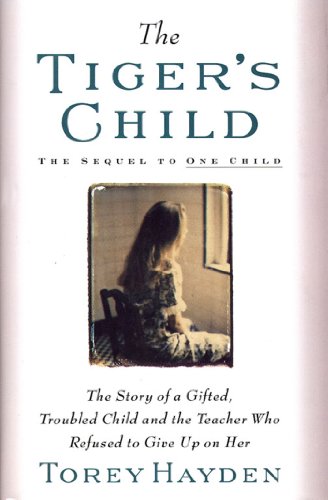 Special-education teacher Torey Hayden's first book, One Child, was an international bestseller, thrilling readers on every continent. Their hearts were captured by Sheila, a silent, troubled girl who had been abandoned on a highway by her mother and abused by her alcoholic father, and who refused to speak. As Hayden writes in the prologue to this book, "This little girl had a profound effect on me. Her courage, her resilience, and her inadvertent ability to express that great, gaping need to be loved that we all feel -- in short, her humanness -- brought me into contact with my own."Since then Hayden has gone on to write books about many of her students, but her fans continue to ask her, "What happened to Sheila?" The Tiger's Child is her response. Here Hayden tells how Sheila, now a young woman, finally came to terms with her nightmare childhood.When Hayden was working on One Child, she showed the manuscript to Sheila, then a teenager, and was astonished to find that Sheila remembered almost nothing of her troubled younger years. She had no recollection of her many clashes with her teacher as Hayden tried to break through her emotional pain. And although Hayden had managed to get Sheila to communicate and become an active and lively child, Sheila's home life was still very troubled. Her father had been sent to prison when she was eight and Sheila had run away from a series of foster homes until finally she was placed in a children's home.But as Hayden continued to renew her relationship with the teenage Sheila, the memories slowly came back, bringing with them feelings of abandonment and hostility. Overwhelmed by the intensity of her awakening emotions, Sheila was driven to suicidal despair. The Tiger's Child is the touching, inspiring story of how a maturing Sheila came to perceive her mother not as a monster who willfully cast off her eldest child, but as a weak, forlorn, ordinary human being. Able to appreciate her own strength and resilience, Sheila at last is free to overcome the haunting legacy of child abuse.

I first read One Child when I was thirteen, and it was a powerful force in my life, impacting me more deeply than any other story I have ever read. I related somewhat at thirteen to her life at six, and have read the book millions of times since, always wondering what became of Sheila and what her life might be like now. So when I discovered this sequal yesterday, it was like a goldmine. My biggest emotional reaction was deep sorrow, because One Child WAS like a fairy tale that had led us to believe that Sheila would probably be all right now that Torey had given her the wings to fly. But reality tended to beat Sheila up one side and down the other like a spiked club, and she no longer had anyone to help her through it. I look at Sheila as having lived her life very much alone with the exception of the five months in Torey's classroom in Marysville. Is five months really enough to build a sturdy enough platform for this kid? All kids need constant care and attention; kids in healthy households living comparatively idyllic lives still clamor for more and more attention, love and care. Six is not really big enough to take on the world and conquer it and all its horrors alone, it is barely big enough to tie one's own shoes and remember where your mittens are! I can completely see Sheila's point when she accused Torey of offering her a world full of color and warmth and then sweeping it all away. Sheila was abused before Torey came, while Torey was there, and after she left. Torey's subsequent disappointment at finding this relatively human teenager, including dyed hair and common teenish speech patterns, is naive on her part. What did she expect?