Free Downloads
Ferran: The Inside Story Of El Bulli And The Man Who Reinvented Food 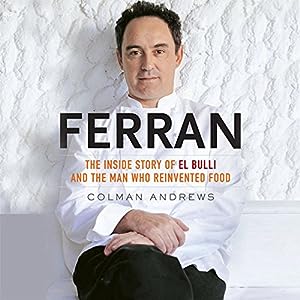 More than just the most influential chef of the late- 20th and early 21st centuries, Ferran AdriÃ  is arguably the greatest culinary revolutionary of our time. Hailed as a genius and a prophet by fellow chefs, worshipped (if often misunderstood) by critics and lay diners alike, AdriÃ  is imitated and paid homage to in professional kitchens, and in more than a few private ones, all over the world. A reservation at his restaurant, El Bulli, is so coveted that scoring a table is harder than nabbing 50-yard-line tickets for the Super Bowl. In his lively, unprecedented close-up portrait of AdriÃ , award-winning food writer Colman Andrews traces this groundbreaking chef's rise from resort hotel dishwasher to culinary deity, and the evolution of El Bulli from a German-owned beach bar into the establishment voted annually by an international jury to be "the world's best restaurant". Taking the listener from AdriÃ 's Franco-era childhood near Barcelona through El Bulli's wildly creative "disco-beach" days and into the modern-day wonderland of AdriÃ 's restaurant kitchen and the workshop/laboratory where his innovations are born and refined, Andrews blends sweeping storytelling with culinary history to explore AdriÃ 's extraordinary contributions to the way we eat. Through original techniques like deconstruction, spherification, and the creation of culinary foams and airs, AdriÃ  has profoundly reimagined the basic characteristics of food's forms, while celebrating and intensifying the natural flavors of his raw materials. Yet, argues Andrews, these innovations may not be his most impressive achievements. Instead, AdriÃ 's sheer creativity and courageous imagination are his true genius-a genius that transcends the chef's mÃ©tier and can inspire and enlighten all of us.

Ferran: The Inside Story of El Bulli and the Man Who Reinvented FoodExcerpted from my article on Ferran Adrià in the October issue of Food Arts magazine."Colman Andrews first began thinking about writing a book about Ferran Adrià at the historic Culinary Institute at Greystone's "Spain and the World Table," conference in November, 2006. At that conference there was a particular poignant moment that was the climax of what Andrew's calls "a hugely ambitious, highly successful . . . program," when The French Laundry's Thomas Keller introduced Ferran Adríà to tumultuous applause. Coming after the 2003 The New York Times Sunday Magazine article, Arthur Lubow article that posed the question, "Is Spain the New France?", the French-trained, Francophile Keller's introduction was something very much like the passing of the torch to Spain and to Adrià, who for nearly a decade now has been called "the world's greatest chef" and his restaurant, elbulli, "the world's greatest restaurant." That moment at the CIA-Greystone well may have been the greatest event in Spain's long culinary history. Andrews-with the help of elBulli (the official name of the restaurant) alumni, Ferran Adrià confidant and chef-restaurateur José Andrés "kept after" Ferran for nearly a year. At one point, Andrés told Andrews, "If he thinks this is my idea or your idea, he will maybe not be so eager to say yes. He has to think it is his idea." They both persisted until Ferran told Andrews, "the next time you are Barcelona, we'll talk.