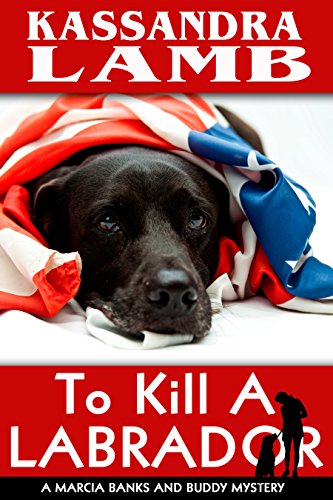 Marcia (pronounced Mar-see-a, not Marsha) likes to think of herself as a normal person, even though she has a rather abnormal vocation. She trains service dogs for combat veterans with PTSD. Then the former Marine owner of her first trainee is accused of murdering his wife, and Marcia gets sucked into an even more abnormal avocation–amateur sleuth.Called in to dog-sit the Labrador service dog, Buddy, she’s outraged that his veteran owner is being presumed guilty until proven innocent. With Buddy’s help, she tries to uncover the real killer. Even after the hunky local sheriff politely tells her to butt out, Marcia keeps poking around. Until the killer finally pokes back.

I'm a dog-person so I enjoy most all of the "dog books". I don't read a lot of heavy books that take a lot of concentration (I am 87 yrs. young and so have given up anything that takes a lot of thinking!!! My children bring me "those books" because they think I need stimulating reading. Ha!!I think very young people and "older" folks would enjoy these "Dog Books".

The ex-Marine with PTSD and the murder of his wife set the stage for Marcia to somehow feel responsible not only for the therapy dog she trained, but for Jimmy as well. There are twists and turns and characters are not always as they seem initially.Marcia's curiosity and outrage at the stereotypic response to the veteran lead to some interesting interactions while working with Buddy's despondence over his change in placement, her continued training of Lacy and Max, and the surprise in her living room. Then there's the hunky local detective and Marcia's hesitancy to engage in the possibilities there.Well-written, with well-developed characters make for an enjoyable read on many levels. TO KILL A LABRADOR is bound to capture the interest of many.

I loved this book from the very first page – and it had me captivated to the very last word. Marcia (pronounced Mar-See-A) Banks is a fun and quirky character – who trains service animals for those afflicted PTSD – mostly combat veterans in small-town Florida. What’s not to love about a cozy mystery that involves a person dedicated to such a worthy cause – and a dog named Buddy, too?! The story truly sucks you right in and keeps you riding along the til the very end. This is the first in a new series by Kassandra Lamb – author of the great Kate Huntington mystery series. Just like the Kate books, I now can’t wait for the next in this new series. I know it’s a guarantee if it’s written by Kassandra Lamb that I’m going to savor every word and search for clues along with the protagonist(s)!!! By the way – the cover is adorable, too!!!!

I read this book with an eye to the service dog. I bring a background of having lived in Florida, having been a dog breeder and trainer as well as now having my own service dog. This series is going to be just as captivating as Kassandra Lamb's Kate Huntington series. Marcia Banks appears to be a unique and likable character and she certainly has a romantic spark in this book. Buddy is a pretty good ideal of a service dog meeting the needs of a military veteran with PTSD. From the beginning I was fascinated with how Buddy was going to become a central character in this series and I was totally satisfied with the outcome. I would recommend this new series to all who like murder mysteries and are willing to learn more about our military and first responder veterans with PTSD and how a small, dedicated group of people are working to train service dogs to meet the individual needs of these people. This is a great new series for all dog lovers and patriotic citizens. Kudos Kassandra Lamb on this new endeavor!

I'm a sucker for novels with a dog character, but I have been noticing more and more that some authors are inserting dog characters and a pic of the dog on the cover just to make the sale without any real effort to write the dog into the plot. To Kill A Labrador is not one of them. The dog is clearly part of the story, and the human characters and plot are believable. I enjoyed the storyline immensely and appreciate the effort the author took to explain about service animals and their importance. I look forward to the next book in the series. Very talented author.

Being one who loves mysteries and dogs, to begin with, I knew I'd like this book, to begin with. Add the PTSD dimension, and I was hooked! Marcia Banks is a highly-believable, multidimensional character who is also really likable. And I reveled in Buddy's warm, assuring "dogginess" and Will Haines' "hunkiness". This engaging "read" has kept me good company while I've been hanging out with the hub, awaiting his surgery. Great job, Kassandra Lamb!

Nice easy mix of mystery, dog training, a taste of what some vets deal with upon return and maybe some romance.... at least a hint . Small towns are a character in and of themselves in reality and that was certainly true in this! I look forward to getting to know Marcia and Buddy.

I enjoy dog books. This one informed me of the services dogs for veterans with PTSD and so was very interesting. Being alternating husband and wife gave two sides of the story. But the dog was my hero.