Free Downloads
Another Fork In The Trail: Vegetarian And Vegan Recipes For The Backcountry 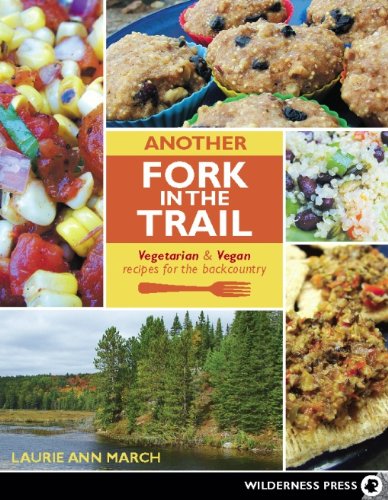 Packed with lightweight, mouthwatering recipes for backcountry adventurers, Another Fork in the Trail is focused on delicious, easy-to-prepare recipes for those following vegetarian and vegan diets. It includes more than 120 recipes, all of which survived Laurie Ann March’s rigorous testing, both at home and in the backcountry. Many of the recipes are gluten-free as well and thus suitable for the growing number of those suffering from celiac disease. From flavorful lunches, such as roasted tomato dip, to hearty dinners such as vegetable ratatouille, many of the recipes are prepared and dried at home, saving valuable time at camp. With recipes for desserts and baked goods in addition to the staples, the book covers menu planning and recipe creation and discusses other important considerations for the vegetarian and vegan outdoor adventurers.

March's recipes are outstanding, as are her instructions for preparation. This book was really well researched and written. I like that she includes information on companies that sell vegan- and vegetarian-friendly pre-packaged meals, plus sources for possibly hard-to-find ingredients. ('Instant' wild rice? Fantastic!) I haven't had a chance to put some of the recipes to the test because I don't have a dehydrator yet, and that features prominently in some of the recipes. However, there are plenty of other options to try without one. And here's the kicker - this is like two cookbooks in one. You can prepare many of these recipes for every day use, and just skip the parts about dehydrating and preparing the food for hiking, etc. The recipes are fine for everyday cooking - they are not just 'desperation' meals you would assemble for being on the go. So that's like getting a 'regular' cookbook and a 'backcountry' cookbook all for one price.Even better than that, she gives lots of instructions for designing your own recipes. If you have a favorite dish that you'd like to take into the backcountry, she gives instructions on how to dehydrate it, or how to prepare it so you can take it with you. She also has lots of pointers that you might not think about on your own, like separating granola into individual serving portions for each person, which helps cut down on the chance for illness, since no one with dirty hands can dip into the communal bag of granola. She has lots of advice on stoves and cooking. She has information on food planning, menus, cooking skills and styles, weight limitations, methods for rehydrating food, advice about when to eat light and eat heavy, food storage advice, etc. This book is just packed with helpful information.