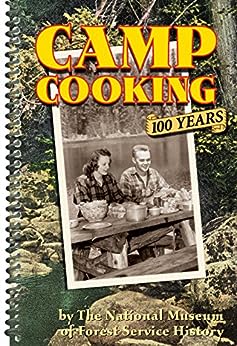 The National Museum of Forest Service History presents a charming cookbook that celebrates decades of camp cooking by countless Forest Service agents in the field. Featuring legendary recipes for Dutch oven meals, open-fire dishes, and other tasty outdoor specialties used daily in the early days of the Forest Service, Camp Cooking has dozens of recipes, photos, and anecdotes that tell the whole history of these brave and hardy individuals. Dedicated ranger's wives prepared meals with limited resources as they accompanied their husbands in the field, often supplementing cooking with k-rations cooked over an open fire. In rustic and remote locations, delicious, time-tested creations were prepared and served, including Dutch Oven Beer Bread, Parmesan Mashed Potatoes, Pioneer Night Stew, and Creamy Pumpkin Pie. To pay tribute to decades of dedication of Forest Service employees, the Intermountain Region and the National Museum of Forest Service History are proud to present this collectible cookbook.

I highly reccommend this charming book produced by the folks at the National Forest Service non-profit museum in Montana, and chock full of recipes from forest ranger districts all over the country, celebrating 100 years of service. So it is filled with historic stories and photos of early ranger camps and cooks. Some of these vintage recipes have been around for awhile, and are very nostalgic. Most recipes list the contributing ranger, and their district. Spiral binding makes it easy to cook with, as you can keep the book open and flat on the page you need. All cookbooks should be made like that.Most of these dishes are for cooking on a cabin stove or fire. The recipes rely on heavier fresh, dry, or canned ingredients similar to what you have at home. So any of these recipes can be made in your own kitchen, but are also good for RV and car camping. Starts with dutch oven cooking basics. Has chapters on breads, breakfasts, veggies, main dishes, and desert. Has an index. This book was released in 2004. It is 192 pages in length.For a look at modern Ranger cooking see "Wilderness Ranger Cookbook", which is a modern ultra-light backpacking recipes cookbook from backcountry Forest Service Wilderness Rangers all across America. It is available at .

This delightful book presents a mixture of terrific recipes, historic camp photos and wonderful tales of early days in the Forest Service. The emphasis is on Dutch oven and camp-fire cooking. Inside you will find dozens of interesting recipes: Bean Hole Beans, One-Eyed Buffaloes, Pistol Rock Chicken and Creamy Pumpkin Pie to name just a few.Far more than just another cookbook, "Camp Cooking: 100 Years" is a real treasure of Forest Service lore. This is one book that always finds its way into our 5th wheel when we hit the road and yet quickly migrates back into the house as soon as we return to our place of sticks and bricks. If there is a better camp cooking book for the money, we don't know what it is.

Absolutely the best camp cookbook I have had yet. Recipes are simple and easy to understand. Ingredients can all be found at any supermarket, even small ones. The breakfast section alone is worth the price of the book.(These cooks really liked a big breakfast) The book is durable and there are enough recipes to last the average camper years before having to repeat a meal. Most meals will feed 4 to 6 easily and the additional stories, tips and photos are a great bonus!

Not what I was expecting. There are some great recipes, but the real appeal of this book is the history. The photos and stories alone make it worth the price. Warning! If you aren't cooking for a large group you'll have to scale down a lot of the recipes.

I ordered 4 different camp cook books and this one I like the best. Recipes seem easy enough for camping from the Campers Omelette to Enchilada Pie, and lots of desserts. Even a recipe for backpacking bars in the back of the book that look like they would be a hit. A little history through out the book interesting pictures. Great Camp Book. Wish I had bought this one first.

I rec'd the book by post one afternoon and didn't lay it down until I had read it all. ( except for dinnertime ) The cookbook published by the National ForestService was great reading but also provided many tips and recipes invaluable when cooking outdoors. On a scale of 1-10, I would give it an 11.

What a beautiful book. Not only are the hearty recipes wonderful but the pictures of rangers, campers, and other workers and visitors to national forests are inspiring. When people speak of simpler times I think many have these pictures in mind. Pictures seem to date from 1900s through 1960s (with some more recent pictures) I think. I don't know why but the picture titled "Tourists camping at Grayback Public Campground on the Siskiyou National Forest, Oregon" is striking. It's easy to replace the old vehicle with a Jeep and the canvas tent with a modern dome. But the people transcend time.

This is a compilation of recipes as well as a historical book. The pictures in it are incredible and illustrate the "old" days of the Forest Service.I made the Bean Hole Beans several years ago and they were outstanding. Used a #10 Lodge Dutch Oven and was surprised to see how quickly they cooked. One really has to keep an eye on the water in the pot! After one hour, I had to add water and then once again after 30 minutes.... It didn't take 6 hours to cook my beans.The other one I made was the pork roast (but omitted the black-eyed peas). I browned the roast in olive oil and added one can of chicken broth to the pot. Also, added some stuffing mix at the end.Highly recommended as the recipes are good and the historical portion is excellent.