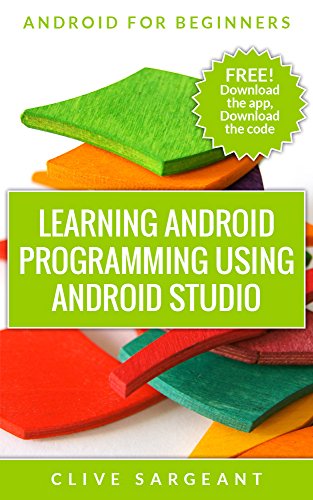 You can develop your own Android apps. It’s fun and it’s easy!We’ll show you how to build your own Contacts app.Download a FREE working version of the app. Try it out. Get a feel of what you’ll build.Check your progress as you build the app, download the project code. It’s FREE!Using the latest development environment – Android Studio - we take you through the building process step-by-step.We show you the basics first. Then we build on that. When you’re finished, you’ll have a solid foundation on which to build any app.Using lots of images and detailed explanations, we make it easy for you.It’s the simplest way to learn Android development.And there's a bonus too! We include links to our popular tutorials as well as to the official documentation.Android apps are made up of many parts. We cover the essentials that you will need to build any Android app.This is what you'll learn:The manifest file – this is where you declare crucial information about your app which the Android system needs to knowActivities – an important component of any Android app. It provides the screen that the user interacts withThe activity lifecycle – we’ll show you how to make use of the different life stages of an activity to execute tasks at critical pointsActionBarActivity – Action bars are the strip at the top of the screen containing the app icon, title and perhaps the menu button. It’s only been around since Honeycomb. Using the ActionBarActivity class lets you use an ActionBar on earlier devicesListActivity - list activities are specialised activities that we use to display scrolling listsAdapters - we use adapters to link data to a view. We’ll show you how to use one to link our contacts data to the list that we displayAlert dialogs - dialogs are small windows that pop up on the screen which require the user to do something, like press a button. We’ll show you how to build and display an alert dialogShared preferences - we use shared preferences to save primitive data in a file which we can access from anywhere in the appToast messages - toast messages are short messages that appear onscreen for a second or 2, informing the user about something. We’ll show you how to use them in your appLogCat messages – we’ll show you how to use the LogCat to debug your appListener interfaces such as the OnEditorActionListener and the OnClickListener - we’ll show you how to use them to listen for critical events such as when the user presses a buttonIntents – intents are a crucial part of the Android messaging system. We’ll use them for passing primitive data and for starting activitiesLayouts – We’ll use layout files to define our screen layoutsText views, Image views, Buttons and Radio buttons - these are some of the views that we use in our appKeyboard – the soft keyboard is useful for capturing a user’s input. We’ll use one to capture a contact’s dataMenus – we’ll use a menu to navigate between the different screens. We’ll also create a menu class which makes it easier to add menu’s to an activityResources like strings, dimensions, colours, arrays and drawables - these are the essential extras for any app. We’ll show you how to create them, where to put them and how to use them

This was a great book for beginners. The book walks you through creating a sample application, which is also available for download from the Google Play store. The steps are easy and cover many of the basic programming concepts you'll need to get started with Android. This book is not about teaching you Java, so if you have no Java programming experience you will be out of luck, however if you know a language such as c#, then you can follow the examples with no problem. There are links to the official Android documentation that applies to that section as well as links to a tutorial site. What I find helpful the most was the "A Quick Explanation" sections after completing the steps. These "Quick" sections provide an explanation on the programming steps that you just completed.

This book is excellent for the beginning Android Studio programmer. The book enabled me to navigate the platform while learning the fundamentals and nuances of AS.The one thing it didn't describe was how to capture data, modify and return data. All in all, easy to understand roadmap to developing Android Apps, I'll use this book as a go-to reference.

As of 12/29/2014, this book seems completely out of date. Probably refers to an ancient version of Studio.The instructions at the VERY beginning are complete showstoppers. The current Studio requires you to add an activity at the very beginning. If you select an activity, e.g., blank activity, then the main activity class is created for you and it is DIFFERENTfrom the class described in the book. It refers to ActionBarActivity but the book refers only to Activity.The only way to get past this (I can find) is to select "do not add an activity" which creates a totally empty project file and NONE of the instructions for creating a MainActivity work. The current download installs Android Studio 1.01 which is what I am using.I will continue to futz with this, there is probably some good info inside, but any "beginner" would be completely lost at thispoint.I suggest you go look for a better book.