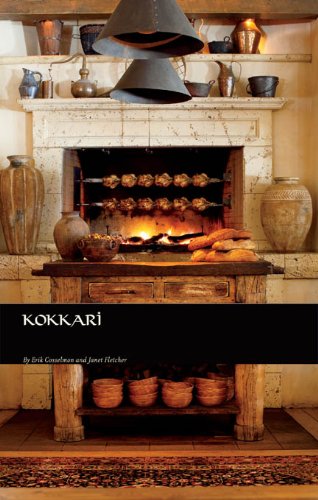 Traditional family recipes and the ancient Hellenic custom of welcoming the stranger as a friend known in Greece as philoxenia have inspired the uniquely welcoming ambience of Kokkari restaurant in San Francisco. A whole spring lamb spit-roasting over an open fire greets diners, and the menu offers familiar dishes like dolmades, avgolemono soup, and lamb moussaka along with more unusual Greek dishes such as deep fried smelt, watermelon and feta salad, and grilled octopus. Through its use of fresh seasonal ingredients, Kokkari brings a refined, cosmopolitan sensibility to a beloved Mediterranean culinary tradition. Its owners and chefs are proud to have ushered in a new era of appreciation for vibrant Greek flavors. Now they invite you to try some of their favorite dishes at home, and wish you a Greek bon appetit: kali orexi!

You just never know what sort of ethnic influences you'll find in places. Did you know that Montgomery, Ala., has an Icelandic community thanks to a local university's soccer team? You may have already heard about the Vietnamese presence in the Mobile, Ala., area that is associated with Gulf Coast fishing. I was surprised to find a significant Greek community in Monroe, La., that was centered around a nice Greek Orthodox church there. That was where I first discovered the great grilled foods in Greek cuisine and I'll bet there were members of that church that didn't turn out for as many of the benefit lunches and suppers that I did.That's why I was very interested to see "Kokkari: Contemporary Greek Flavor" by Erik Cosselmon and Janet Fletcher ($40, Chronicle Books, 224 pp.). Kokkari is a San Francisco Greek restaurant and Cosselmon is its chef. He's joined with Napa Valley author Fletcher to bring forth a very well done book. There was a strong commitment made to graphic layout and full-color photos that really tell the story of Greek food. As a matter of fact, the photography is so good that I wanted to lick the page where a delicious-looking baklava headed the desserts section.The recipes are Greek cooking at its best. It may not be as homey as the church cookbook that I once purchased at that aforementioned Greek Orthodox church, but these are dishes that are sure to inspire you to explore this cuisine: mosharisia brizola (grilled rib eyes), mosharaki youvetsi (beef short ribs), souvlaki arnisiou kima (spiced ground lamb skewers) and kouneli souvlaki (grilled rabbit skewers), plus a load of different seafood selections. Cosselmon and Fletcher have provided us with an opportunity to sample Kokkari's flavors even if we can't make it to San Francisco, let alone get reservations!