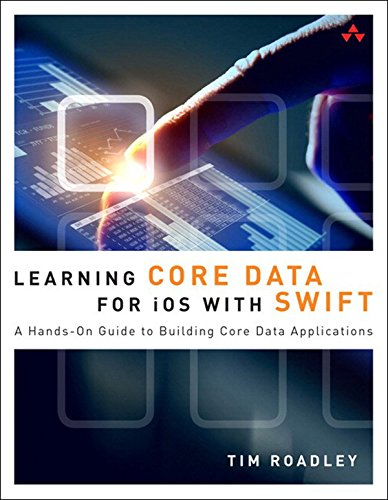 Get Started Fast with Core Data App Development Using iOS 9, Swift, and Xcode 7   Core Data is a remarkably mature, stable, and fast platform for data access, and Swift is a world-class language for applying it. Now, there’s a complete guide to using Core Data and Swift together in production apps. Tim Roadley shows you how to gain the benefits of a relational database without writing SQL queries, so you can get more done faster, with less coding.   This book fully reflects Apple’s latest iOS 9 platform innovations and teaches Core Data entirely with Swift examples. It guides you step-by-step through creating a modern data-driven iOS app that fully integrates iCloud via CloudKit for public data sharing.   Roadley introduces up-to-date patterns and best practices designed to overcome the frustrations of Core Data development. Each chapter builds on the last, introducing new topics in the order you’ll implement them and extending your skills simply and intuitively.   Each chapter offers downloadable project code, along with exercises to help you explore even further, either as a self-learner or a student in an iOS development course. Roadley even shows how to build helper classes that simplify reuse of his example code.   If you’re an experienced iOS developer, here are all the Swift skills and resources you need to integrate data into any app—quickly, easily, and painlessly.   Coverage includes

Well, in general, this is a very good book, and I will take a few minutes to talk about the good points. But I want to start talking about the bad points, because they prompted me to write this review.In short, this book makes the same mistake that many iOS books make. iOS is such an exciting technology that has been around for almost 10 years that everyone wants to write for it. In response to that, people write many books in the topic but it's hard to find quality material on it. Mostly because authors, in an attempt to cover a lot of topics, end up writing a lot of unimportant text in their books.Case in point: This is a book about Core Data. So the author shouldn't sidetrack to talk about "the basics" of table view controllers and views. There is no reason to do that. The author should (rightly) assume that everyone reading this book is familiar with those topics. After all, Core Data is a big beast to tame, and it just makes sense that people reading this book should be familiar with the basics of iOS development. Because of this, the book ends up being longer than it should be, and some code samples are extremely basic. That is not something you expect out of Core Data.Alongside that, I hate it how it always explains with extreme baby steps how to create files. "Step 1. Select your group in Xcode. Step 2. Go to File > New File > select Swift File...". Not only should everyone reading this book know how to create files on Xcode, but also those steps are repeated many, many, MANY times in this book. It's tedious and boring. The author could easily say "Create a new file to hold this X class". This book is about Core Data in Swift. People will rightly assume they have to create a Swift class, not an Objective-C one.