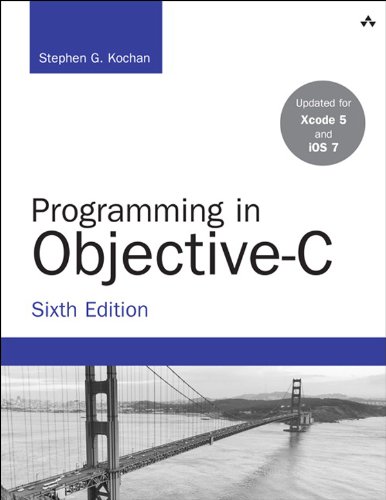 This book is awesome. You can tell Mr. Kochan is a no nonsense sort of person, or at least his teaching style is. He's very much in key when it comes to teaching nothing but the objective C language. I began reading the Big Nerd Ranch guide 2nd edition and progressed to 23 chapters before looking here. It's funny because every time I was confused, I used the 3rd edition guide by Kochan to answer some of my questions....then I realized I should be reading this book! I was skeptical at first because the book didn't seem as inviting as the BNR guide but the information was right to the point and succinct.Mr. Kochan said something that I highly appreciate looking back now(by that I mean after reading most of the BNR guide): 1. is "I am going to teach you the objective-C language, .....not iOS or the frameworks or anything else, the focus is the language".For you new OBJ-C programmers, I am telling you now....this is what you need. In the BNR guide, it's an excellent resource but Aaron Hillegass tries teaching you the C language first, then objective-c..... not too mention that the exercises in the BNR guide require a good amount of outside research, iOS design and many other aspects all in the confines of only a couple hundred pages. That's why there's so much to learn in any given chapter. I especially didn't see the need in learning C first, not that it isn't helpful but rather the little we did learn was only enough to confuse you because you don't become proficient in C you just learn its basic syntax which apparently OBJ-C is built off of...(I didn't feel so necessarily, but anyway).....I will say that in the BNR guides defense that it's a little simpler introduction but there's a point in that book that goes from 60 to 150mph in two pages....