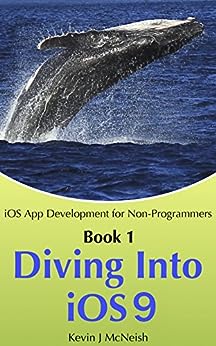 Winner of the Publishing Innovation Award!"Dedicated to Steve Jobs, this book highlights much of what Jobs himself strove for - clear, crisp design, intuitive interface and user experience coupled with high quality, clear content." - Digital Book World "Most of the books I scanned, even the "Dummies" series, assumed a basic knowledge of computer programming even for iOS beginners. What I like about Kevin’s writing is that he doesn't make any assumptions – he just takes you there – step by step." - Lorraine Akemann – Moms With Apps Non-Programmers Learn to Create iOS Apps This first book in the series from Kevin McNeish, award-winning App Developer, highly acclaimed conference speaker, and featured writer for iPhone Life magazine, is designed to teach non-programmers to create Apps for the iPhone and iPad. Many books designed for new developers assume way too much. This book series assumes you know nothing about programming. Includes Step-by-Step Instructional Videos!There are seven step-by-step instructional videos in which you watch the author create each part of the App. This is great for those who might need some extra help. Up to Date With the Latest Apple TechnologiesAs Apple releases new versions of iOS, this book is updated and you receive a new version of the book at no extra charge. This book is up to date with the latest iOS technologies including iOS 9 and Xcode 7. Review"Very often these 101-type books can fail with their slightly patronizing tone. Kevin J McNeish triumphs with his spring over and beyond this hurdle. His first "easy in" publication in a series, comprises short, concise and engaging chapters and exercises that have been reviewed by testers from the demographic that the book is intended for. - Publishing Innovation AwardsLearn how to create Apps for the iPhone and iPad. Scroll up and click the Buy button now! About the AuthorThe author has spent much of his software career making difficult concepts easy to understand. He has taken the vast experience accumulated in teaching his highly acclaimed iPhone & iPad classes, workshops, and boot camps and presented it to you in this book series. He is also a featured writer and blogger for iPhone Life magazine.Follow Kevin on Twitter: @kjmcneishOn his blog: http://www.iphonelife.com/blog/kevin%20mcneish

I downloaded a sample of a non- version of this book on my iPad purely out of curiosity. I got far enough along in the sample that I had to buy the book to finish what I'd started. To my amazement, setting up iOS apps isn't nearly as difficult as I'd imagined.This book is NOT a book on programming. All it does is teach you how to set up a storyboard for an app. A storyboard is essentially a skeleton for an application. You'll be able to create screens for an iPhone/iPad app after going through this book, but it does not cover programming. To put "meat" on the bones of your app, you'll need to learn Objective C, which I hope to do with the second book of this series.It's an easy read, there are no typos or loose ends, and the iPad version of this book has videos that walk you through each chapter. I got through this book in less than a day and it's obvious the author put a lot of work into making the book readable and giving readers the "instant gratification" of seeing results out of the gate.For this book, you literally need zero experience to get results. Just bear in mind there's no programming in this book, it just shows you to structure screens of iOS apps. I'll update this review once I'm through the second book of the series.

I am a Microsoft.net developer trying to understand how to write an iPhone application for a few years, but have never found a book that made sense for a guy that knows windows. With this book, I finally understand the relationship between Xcode, objective-c, cocoa framework, and the related Mac tips. If I don't get a concept, the video at the end of each chapter brings it all together. I also like that the book isn't filled with fluff to get a page count. I strongly recommend this book for the developer that wants to get into the iOS game.

Before I get into the critical part of this review, I'll begin with some positive comments. Overall, the book is well written and explains what the author is doing very well. The pictures are very helpful. Additionally, @$10 for the kindle edition, the price is good.With what I said above in mind, this book and it's description are misleading. The book takes one through a series of steps of creating a pseudo Delivery app. In each chapter additional parts (Views) are added and are done in a fairly straight forward manner. However, the author does not provide a single line of code making the entire app useless. The delivery locations are manually added in the Storyboard and are his static, without any real meaning. The real beauty in an app is the ability of the user to add to table and show locations etc. I was very disappointed after I purchased the book and saw that there was not a single line of code.I'm not sure if I want to purchase the second book in this series after this disappointing read. The second book does appear to be much longer and indicates that Objective-C is the subject so I may. However, code should have been given along side the visual steps so one would know what to do when designing a different app.

This book does a fantastic job of taking a person with no experience and a simple desire to develop mobile applications to a level in which they're confident and ready for more. It provides step by step information from how to get started (recommend hardware, software, tools) to building your first prototype application. It does such a good job that in case you missed something in the read and want to see a live example it provides step by step videos that are available in the book as you are reading! Great job! Can't wait for the next book!

If you have ever had a great idea for an app, but didn't know where to turn. You tried to read a software development book, only to be confused by the technical jargon. You talked to the kid down the street that "knows computers", but couldn't understand what he was talking about. You went to a professional software house and they wanted you to sign over your first and second born child? Then this book is for you. It takes you from the very beginning of the software design and development process, to actually setting up a project on your own machine. It tells you exactly what hardware and software you need to get started, so you don't have to shell out major bucks only to find out that you didn't need all that stuff. This is an easy read for anyone interested in creating their own apps for the iPhone/iPad/, even if it's just an app that you would like to use for yourself. My son is very interested in creating apps, but he has no training in that area. I'm giving him a copy of this book to get him started.

McNeish's book is well organized and technically simple to follow. Despite being an "educational guide" the book contains beautiful photography that adds a third dimension to an already interesting read for the "non-nerd." Kevin McNeish is the Einstein of the iOS app education community. OK, maybe he is a bit more mortal, but here is a useful analogy: When Einstein's wife was told about the marvels of the telescope that Hubble used to determine the universe's shape, she reportedly replied, "Well, my husband does that on the back of an old envelope." Though McNeish may be able to describe every mathematical nuance of writing software, this book is his "envelope" and he does an amazing job of simplifying app development so anyone can succeed. I look forward to the subsequent editions in this learning series by McNeish. There is a reason the App Store is exploding... books like this make development accessible to the average person.