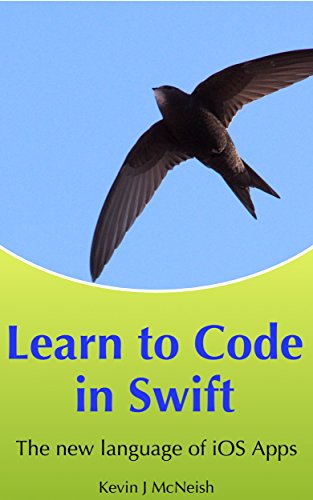 Master Coding iOS Apps Quickly!Learn Swift, Apple's powerful new programming language for creating iOS apps from award-winning author, and iPhone Life magazine featured writer/ blogger, Kevin McNeish!Updated to Swift 2.1 and Xcode 7This book has been updated to Swift 2.1 and requires the use of Xcode 7 or newer. This means you're getting the most up-to-date information on Swift available!Includes Training VideosThis book teaches you best practices for creating iOS apps in Swift using advanced educational tools such as:20 step-by-step movies with coding exercises25 Swift sample projectsAn online forum where you can et all your questions answered.What You Will LearnThis book goes beyond the basic syntax and uses practical examples demonstrating how to use the full power of Swift in your iOS apps. It provides clear, in-depth explanations of even the most challenging Swift concepts.In the first few chapters, you learn the basics of Swift programming and then begin applying your knowledge by working through exercises at the end of each chapter that teach you to use Swift programming principles in real-world apps.Here are some of the concepts you will master in this book:Understanding Swift Classes and ObjectsWorking With OptionalsArrays and Other CollectionsLooping and Conditional StatementsAdvanced PropertiesData Types and ConversionsWorking With StringsEnumerationsInitializersAccess ControlUnit Testing Your CodeInheritance and PolymorphismMastering Protocols and DelegatesThe Power of ExtensionsGenerics in the Real WorldUnderstanding ClosuresAppending containing Swift free functions, data types, and operatorsHandling ErrorsUpdated to the Latest Versions of iOS and XcodeAs Apple releases new versions of iOS and Xcode, this book will be updated to the latest versions, and you can request an updated copy from , free of charge!About the AuthorKevin McNeish is a featured writer and blogger for iPhone Life magazine, winner of the prestigious Publishing Innovation Award, and an award-winning app developer. Kevin is also Chief Software architect of Oak Leaf Enterprises, Inc. He has a knack for explaining difficult concepts in a way that you can truly understandFollow Kevin on Twitter: @kjmcneishHis blog: http://www.iphonelife.com/blog/kevin%20mcneish

I had the opportunity to read the book "Learn to Code in Swift - The new language of iOS Apps" by Kevin J. McNeish, over year end holidays. I've been looking for a good book on Swift, as I spent last summer translating my own app from Objective-C to Swift. While I really didn't know what I was doing, I had done a literal translation as a means of trying to learn the syntax of the language. Since then, I have been trying to get a better understanding of some of the differences between Objective-C and Swift, so that I may be able to clean up my app a bit.I had met Kevin at MacWorld some years ago, and had picked up his first iBook on Obective-C. I found it to be a good beginner's book. With that as a background I was looking forward to reading this book.Let's begin with the structure of an individual chapter. Each chapter has a specific theme, and within that theme Kevin spends considerable time explaining the specifics and concepts behind that that theme. Unlike many books, he doesn't assume that you are an expert in computer theory or computer science. While he doesn't go too deep on the theory, he does explain enough of it to help solidify the concepts of the specific theme. Each theme is broken apart into specific concepts or, if appropriate, API calls. He provides simple to understand code examples so that the concepts stick with you. He also spends enough time explaining the Xcode environment, which is a great boon for someone just getting started learning iOS programming. I have yet to find a book that does this, so it was refreshing to learn a few tricks I had not yet discovered.

Frankly, I know Kevin since more than a decade, attended one of his five-days workshop, and he simply keeps on delivering solid, high quality content that is logically structured, easy to read and to understand. Despite being a seasoned software developer in other programming languages I was very pleased when Apple introduced their completely renewed and well-designed programming language Swift. And although I'm more focused on using C# on Xamarin to develop smartphone and mobile application I always like to keep an eye on other technologies. As Swift is surely one of them I thought to give Kevin's book a shot... And he has delivered as expected.Only by looking at the table of content I knew that this is going to be a fun read. The book is actually structured like a set of full-day classes or better said a training workshop for beginners in Swift. It starts with the basic elements of Swift, then covers code workflow and finishes of with more advanced topics like closures and error handling. Throughout the chapters there are some samples which have some hidden gems (for those knowing Kevin, his family and friends more closely). Those samples put a smile on my face and gave me a couple of chuckles, like in chapter 10 when Kevin explains the handling of arrays in Swift using "well-known" names as array elements.Unfortunately, I'm giving a 4 stars rating only for two reasons:* The amount of either typographic, grammar or contextual errors. The book version I had at the time reading had at least an error in every chapter. Some of them are quite obvious just by reading through the chapters, others are a bit trickier, ie. explanations in text don't match the illustrations or diagrams.