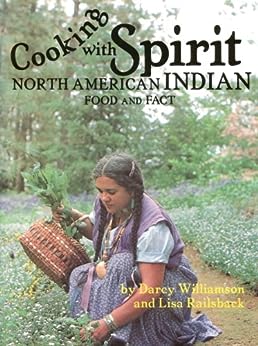 It might be called a cookbook ~ if you want to prepare stewed dog in a buffalo bladder, or make "Midge's Navajo Reservation Macaroni and Cheese," modern Indian fare concocted with government-issued commodities.It might be a natural healing guide, if you're willing to talk with medicinal plants before you pick them.Or it might be a folklore anthology, with American Indian stories about the origins and adventures of the eel, the coyote and other wild creatures.But authors Darcy Williamson and Lisa Railsback reject these categories when describing Cooking with Spirit, Native American Foot and Facts.Williamson is an award winning writer who lives near the small central-Idaho town of McCall. She has more than two dozen books to her credit, including several natural-food cookbooks and an at-home schooling guide. She has recently completed a historical novel, Sister's of a Different Dawn, about a Shoshone Indian woman and her proper Bostonian sister-in-law and their conflicts during the mid-1800's.Railsback is a Navajo-Apache artisan who has visited Indian reservations throughout the country, collecting information on Indian foods, healing methods, folklore and crafts. When she's not on the road she operated a store in northern California, selling rare traditional Native American crafts. She also teaches seminars about symbolism in American Indian art.The two women met in 1984 and became instant friends. Cooking with Spirit is a product of this friendship that has now spanned over a quarter of a century.