Free Downloads
And The Band Played On: Politics, People, And The AIDS Epidemic 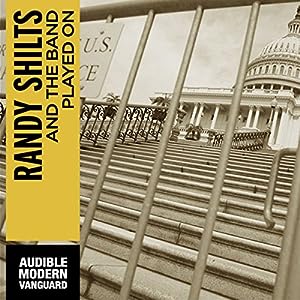 Upon it's first publication twenty years ago, And The Band Played on was quickly recognized as a masterpiece of investigatve reporting. An international bestseller, a nominee for the National Book Critics Circle Award, and made into a critically acclaimed movie, Shilts' expose revealed why AIDS was allowed to spread unchecked during the early 80's while the most trusted institutions ignored or denied the threat.  One of the few true modern classics, it changed and framed how AIDS was discussed in the following years. Now republished in a special 20th Anniversary edition, And the Band Played On remains one of the essential books of our time. --This text refers to an out of print or unavailable edition of this title.

Randy Shilts masterpiece, "And The Band Played On", reads like a detective story; from the discovery of an unusual new organism that was killing a few people slowly and inexorably in the late 1970s and early 1980s, and multiplied exponentially underground until it exploded into the number one health catastrophe on the planet.The fact that AIDS at first took its heaviest toll among gay men, and then among intravenous drug users, guaranteed that its early victims would become outcasts. The AIDS panic seems unbelievable in retrospect but was all too real in the 80s; people were forced off their jobs, children were barred from schools, and anyone who belonged to the "4-H club" (homosexuals, hard-drug users, hemophiliacs, and -- incredibly -- Haitians) were treated like pariahs. The secrecy and denial in dealing with the crisis helped it to spread unabated.Shilts pulls no punches in writing this book. He is equally angry at the Reagan administration which preached pious platitudes while withholding desperately needed funds for medical research; the radical gay community which refused to acknowledge its own responsibility for the sexually promiscuous behavior that helped spread the disease like wildfire, and those in the medical community who played grandstanding politics and plain old-fashioned spite while patients were dying all around them. And then of course there was the media, which treated this puzzling, terrifying new disease -- which for two years after its discovery didn't even have a name -- as something the "general public" didn't have to be concerned about, until heterosexual men and women began to be infected.

I'm sure most people are familiar with the story but just as very brief background Randy Shilts was a reporter at the epicenter of the AIDS crisis when it first began. When his paper assigned him to cover the story on a regular basis (the only paper in the country to do so), he gained access to an vast wealth of material and a unique perspective-one that for many years went largely unreported by most of the media until the death of Rock Hudson changed everything. Shilts discovered he himself was HIV positive after he finished the book; he had asked his doctor not to reveal the test results to him until then. He passed way in 1994. His work to alert his own community on the coming health crisis often made him a pariah within it.This is an amazing history of how the virus took off in America and an insight into why it remained so under-reported for so long. The story involves some very brave patients, some very irresponsible ones, incredibly dedicated medical professionals, major bungling by our government and the blood industry-some of it intentional and some paths paved with good intentions, and the mixed, frustrating reaction of the gay community itself. Shilts doesn't write completely without bias-he calls the decision of the CDC to release patient names to an NYC bloodbank "incredibly stupid" but who wouldn't agree with him on that point? Also, Shilt's fury at certain members of the Reagan administration and Reagan himself is palpable. Once again though, who wouldn't agree with him once the story has been unfolded. His anger is not limited just to the government nor is this just an anti-Republican screed-he praises Orrin Hatch and Everett Koop while bitterly recalling the inaction of Ed Koch's administration in New York. Gay leaders also are not always portrayed in a flattering light.