Free Downloads
The Chimp And The River: How AIDS Emerged From An African Forest 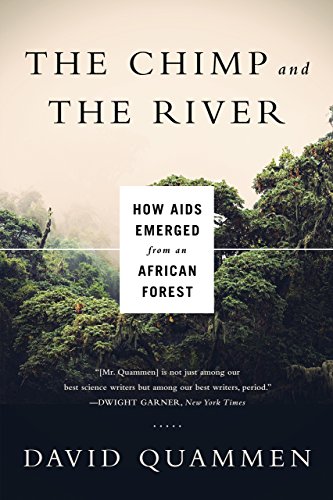 In this "frightening and fascinating masterpiece" (Walter Isaacson), David Quammen explores the true origins of HIV/AIDS.The real story of AIDS—how it originated with a virus in a chimpanzee, jumped to one human, and then infected more than 60 million people—is very different from what most of us think we know. Recent research has revealed dark surprises and yielded a radically new scenario of how AIDS began and spread. Excerpted and adapted from the book Spillover, with a new introduction by the author, Quammen's hair-raising investigation tracks the virus from chimp populations in the jungles of southeastern Cameroon to laboratories across the globe, as he unravels the mysteries of when, where, and under what circumstances such a consequential "spillover" can happen. An audacious search for answers amid more than a century of data, The Chimp and the River tells the haunting tale of one of the most devastating pandemics of our time.

Spillover, Quammen’s comprehensive book about zoonoses, was one of the best books I read last year. So, when I noticed he’d published another book, entitled Ebola: The Natural and Human History of a Deadly Virus, I immediately ordered it from our local library, read it, and realized it was almost entirely a reprint of the Ebola chapter from Spillover!Now I'm wishing I’d have read the author’s blog (which I did, just now…grrr) before getting fooled again. I take full responsibility the second time around (feeling...chagrined) but am still bummed. At least the Ebola book had the teensiest of changes, this one is, admittedly (by the author in this excerpt from his blog),“Zoonotic diseases are the subject of my 2012 book Spillover—a work mainly devoted to the ecology and evolution of scary viruses—from which I extracted and reshaped sections to produce a little 2014 book,Ebola: The Natural and Human History of a Deadly Virus. I’ve now done the same thing (at the suggestion of W. W. Norton) with the long AIDS chapter from Spillover, in order to offer it too as a short, stand-alone book.”I confess, even though he added nothing to what he’d published on the subject in Spillover, I found it fascinating even the second time around, reading along obliviously, in hopes he'd new information. My one complaint (besides the fact that he’s now twice published portions of Spillover as stand-alone books), would be the short historical fiction part of the story where Quammen includes a play by play of what could have happened that would support the “cut hunter” theory. Nearly all, some, or none of that may be true, which is why I am not a fan of the genre, even when included within an otherwise true story.My advice: read Spillover (and skip the excerpt books!).