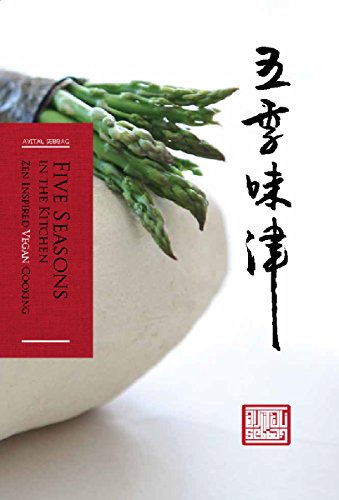 An exciting culinary journey along the paths of vegan cooking and Chinese Medicine.Avital Sebbag, a vegan chef and certified practitioner of Chinese Medicine, inspires you to applie the five elements of the Chinese school in the kitchen. The resoult is a stunning veriety of nutritious and delicious recipes inspired by Zen and ancient principles of nutrition.Practical recipies for quality seasonal food.Five Seasons in the Kitchen contains 75 dynamic and flexible recipes, open to change and creative variation. The readers are encouraged to experiment, substitute ingredients, explore the unique flavors of locally grown products and try alternative cooking methods - all for the sake of celebrating Mother Nature’s abundance in every season of the year.Scroll up to grab your copy of Five Seasons in the Kitchen now!

Five Seasons in The Kitchen: Zen Inspired Vegan CookingI did receive this cook book at a heavily discounted promotional price in exchange for my feedback and please note that the author/seller has no bearing whatsoever on my feedback in any way and my opinions are solely based off my own use of the recipes and my perception of the cook book.With that said Five Seasons in the kitchen enthralled me. I love the foreword and the preface of Zen! These two quick reads already had my attention… Kudos for keeping me interested. Next, Omg, Omg, Omg… I love this book… I love the breakdown of the foods of the seasons (yes there are five late summer is considered a season in this book) and while at the fruits and vegetables are at their peak and why they are best for you!!The illustrations, the directions, the recipes are all attention getters for me and I have been cooking since I was born, professionally for over 10 years. I love the Good to know facts…. It’s great to learn while cooking as we all could learn something every day…Amazing favorites..… The Shallot and Spring Vegetable Pie.. Amazing!!! Yes, I realized I was in the summer months…  The Endive boats stuffed with Macadamia Feta, simple yet elegant!!!Do you like beautiful food also known as Culinary Art? Do you crave amazing ingredients that blend well together, complete your meal and add to your healthy lifestyle? Do you crave new ideas and love to experiment with amazing ingredients? Then this book is for you and your loved ones and acquaintances as well as an amazing gift idea for the novice and advanced home cook.

The book starts with an introduction to Zen, followed by a chapter on seasons of the year which I found to be really fascinating. The recipes in the book are simple enough to make but my reason for giving this book four stars is that not all ingredients are readily available in regular supermarkets and I would hate to substitute since I believe that would defeat the purpose of Zen cooking. So although I really did want to try some of the recipes, I was put off by having to figure out where to buy specific ingredients. Having lived in the US for a number of years, I have become used to the imperial system of measurements so had to get my calculator out for the conversions but this wasn't a huge inconvenience, although it might be useful for people who are perhaps not used to the metric system to be aware that recipes in this book uses the metric system of unit measurement.Apart from that, the recipes themselves were simple (albeit the hard to find ingredients) and fairly quick to make. I especially loved the spring soba noodle salad and the carrot soup. My kids loved the baked vegetable chips and I will definitely be making more of these at home rather than buying them. Some other recipes that I really enjoyed: the Asian papaya salad, the baked falafel (I did skip the nuts in this recipe since my kids are allergic), sweet potato gnochi and the stir fried tofu with green beans.I would say that I would be able to make around 75% of the recipes in this book, I haven't yet tried any of the drinks or the sweets but overall there are a number of great recipes in this book and it is a welcome addition to my collection. No cookbook will be 100% perfect, and Five Seasons in the Kitchen is no exception, but I like that a majority of the recipes are fairly simple and easy to make.

Rating: 3 out of 10I love cookbooks. I have shelves and shelves of them -- in fact, I have an entire bookcase that I use just for cookbooks. It used to be in my kitchen, but now it is in our guest room, because our kitchen is too small to put an entire bookcase in there. I have a computer program to track recipes. Nearly all of my cookbooks are vegan, and they are all vegetarian. None of this is even counting ebooks, because why would I? They take up no space. (Or maybe they take up imaginary space?) I love to get new ecookbooks, because I don't have to worry about where to keep them!I am just trying to impress upon you how much I love vegan cookbooks, and how often I read them. Because neither of those things are the issue with this book.There are several problems with this book. The first is that it uses ingredients that I have never heard of, and have no idea where to find! When I read a cookbook, the first thing I look for is a simple recipe that I can make to get an idea of the author's taste. That was very difficult to find in this book. I don't have any idea what "hijiki" is or where to find it. In fact, the "simple" recipe I ended up making took 2 days to make! I had to sprout the lentils in advance. It was a very good recipe, though. It was delicious but plain, and tasted much better left over, which is good because it took 2 hours to cook, so it was ready well after dinner time (and in fact closer to bed time!).And that leads me to another problem. Reading through this book could make you think that vegan recipes require lots of advance preparation, exotic ingredients that are difficult to find, and lots of cooking time. Nothing could be further from the truth.