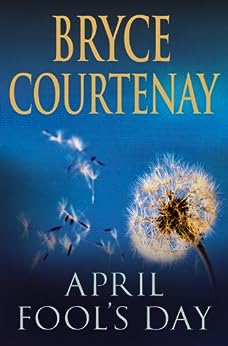 In the end, love is more important than everything and it will conquer and overcome anything. Or that's how Damon saw it, anyway. Damon wanted a book that talked a lot about love. Damon Courtenay died on the morning of April Fool's Day. In this tribute to his son, Bryce Courtenay lays bare the suffering behind this young man's life. Damon's story is one of lifelong struggle, his love for Celeste, the compassion of family, and a fight to the end for integrity. A testimony to the power of love, April Fool's Day is also about understanding: how when we confront our worst, we can become our best. This life-affirming book will change the way you think. Stay in touch with all of Bryce's news on Facebook:facebook.com/BryceCourtenay

Damon Courtenay dies in the first line of the first, introductory chapter of this 666 page book; thus 665 pages tell the story of his life from birth to that death on April Fool's Day, 1991, when Bryce and Benita Courtenay were forced, after 25 years, to surrender their youngest son to the inevitable. The young salesgirl from whom I purchased my copy some weeks ago tried to sell me a jumbo box of tissues to go with it... "You'll need them..." she advised, and I suppose I did, but somehow the sheer length of Damon's journey fom death to birth- and back again to death is so incredibly gruelling that the reader is left as numb and drained as were his parents and his devoted parner, Celeste. "A Modern Love Story" is the book's subtitle, and there is no accident to the nonsubtle cynicism of this description...for this is an ANGRY book, a book that rages, not just against the genetic tragedy that bypassed Benita Courtenay's first two sons to claim Damon- but it is also an anguished, embittered railing aginst the bureaucraticc bunglings, mismanagement, highhandedness and incompetencies that led to his death at such an early age. For Damon Courtenay, born a haemophiliac, died of Aids....transfusion- induced Aids....Aids introduced by transfusions of blood products accepted from donor groups long decreed unacceptable in other countries, using a technique acknowledged to be less safe than other proven, more costly methods. In Australia, at that time, under the Equal Opportunity provisions, EVERYONE had the right to give blood...and a Health Minister defended that right, even though the mechanics of Aids transmission were already becoming widely known. But before the Aids, there was the haemophilia.......