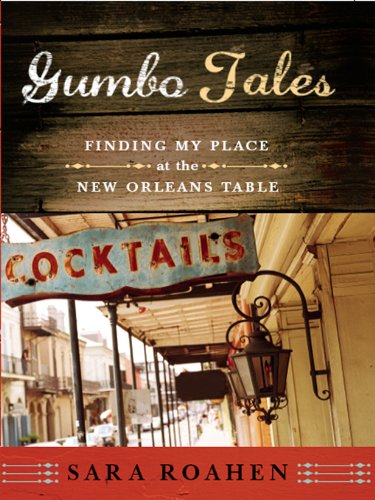 “Makes you want to spend a week—immediately—in New Orleans.” —Jeffrey A. Trachtenberg, Wall Street JournalA cocktail is more than a segue to dinner when it’s a Sazerac, an anise-laced drink of rye whiskey and bitters indigenous to New Orleans. For Wisconsin native Sara Roahen, a Sazerac is also a fine accompaniment to raw oysters, a looking glass into the cocktail culture of her own family—and one more way to gain a foothold in her beloved adopted city. Roahen’s stories of personal discovery introduce readers to New Orleans’ well-known signatures—gumbo, po-boys, red beans and rice—and its lesser-known gems: the pho of its Vietnamese immigrants, the braciolone of its Sicilians, and the ya-ka-mein of its street culture. By eating and cooking her way through a place as unique and unexpected as its infamous turducken, Roahen finds a home. And then Katrina. With humor, poignancy, and hope, she conjures up a city that reveled in its food traditions before the storm—and in many ways has been saved by them since.

I learned of this book from Jonathan Yardley's review in the Washington Post. We were out of ideas for our son's Spring Break and we hit on New Orleans: an eating vacation with Sara Roahen as our guide. I studied the book on a stationery bicycle as I tried to lose 15 pounds to get into shape for six great meals at Commander's Palace, Herbsaint, Bayona, Palace Cafe, Antoine's, and Galatoire's (listed in order, from greatest to merely great). Plus a few po' boys, lesser meals, and snacks, constrained only by our appetites.This is a delightful and worthy book. It is organized around New Orleans' principal food groups with chapters on gumbo, red beans and rice, po' boys, etc. For each Roahen researched vintage cookbooks to trace origins, variations, and controversies. She uses this framework to interweave stories of her life in New Orleans and her experiences with the food and the people who make it, eat it, and live by it. She is a good writer, and her book served my purpose well. Every meal tasted better because of the context she provided.That said her "menu-item framework" is awkward for the story she is telling. The book needs introductory chapters to describe New Orleans cuisine today, its evolution, and why it is unique (and superior!)The introduction should follow easily from her careful research, but she doesn't even take up the fundamental distinction between Cajun and Creole until a chapter about poisson meuniere amandine, 159 pages into the book. The introduction should lay out the basic taxonomy of New Orleans food purveyors from the traditional five star restaurants, through contemporary innovators, to cafes and po' boy shops and street vendors.

Gumbo Tales: Finding My Place at the New Orleans Table Bodies & Buried Secrets: A Rosewood Place Mystery (Rosewood Place Mysteries Book 1) Literary Market Place 2015: The Directory of the American Book Publishing Industry with Industry Indexes (Literary Market Place (Lmp)) A Place at the Table: 40 Days of Solidarity with the Poor Tujague's Cookbook: Creole Recipes and Lore in the New Orleans Grand Tradition Kevin Belton's Big Flavors of New Orleans The Southern Po' Boy Cookbook: Mouthwatering Sandwich Recipes from the Heart of New Orleans The New Orleans Garden: Gardening in the Gulf South The New Orleans Sisters of the Holy Family: African American Missionaries to the Garifuna of Belize Voodoo in New Orleans Sink or Be Sunk! The Naval Battle in the Mississippi Sound That Preceded the Battle of New Orleans Dr. Mary's Monkey: How the Unsolved Murder of a Doctor, a Secret Laboratory in New Orleans and Cancer-Causing Monkey Viruses Are Linked to Lee Harvey ... Assassination and Emerging Global Epidemics City of the Damned: New Orleans (Vampire: the Requiem) The Haunted History of New Orleans: Ghosts of the French Quarter Fear Dat New Orleans: A Guide to the Voodoo, Vampires, Graveyards & Ghosts of the Crescent City The Great Deluge: Hurricane Katrina, New Orleans, and the Mississippi Gulf Coast The Neoliberal Deluge: Hurricane Katrina, Late Capitalism, and the Remaking of New Orleans Katrinaville Chronicles: Images and Observations from a New Orleans Photographer The Best of Peter Finney, Legendary New Orleans Sportswriter Table Layout in CSS: CSS Table Rendering in Detail