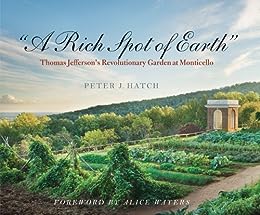 Were Thomas Jefferson to walk the grounds of Monticello today, he would no doubt feel fully at home in the 1,000-foot terraced vegetable garden where the very vegetables and herbs he favored are thriving. Extensively and painstakingly restored under Peter J. Hatch's brilliant direction, Jefferson's unique vegetable garden now boasts the same medley of plants he enthusiastically cultivated in the early nineteenth century. The garden is a living expression of Jefferson's genius and his distinctly American attitudes. Its impact on the culinary, garden, and landscape history of the United States continues to the present day.Graced with nearly 200 full-color illustrations, "A Rich Spot of Earth" is the first book devoted to all aspects of the Monticello vegetable garden. Hatch guides us from the asparagus and artichokes first planted in 1770 through the horticultural experiments of Jefferson's retirement years (1809–1826). The author explores topics ranging from labor in the garden, garden pests of the time, and seed saving practices to contemporary African American gardens. He also discusses Jefferson's favorite vegetables and the hundreds of varieties he grew, the half-Virginian half-French cuisine he developed, and the gardening traditions he adapted from many other countries.

This beautiful book, lavishly illustrated and engagingly written, is, I fear, going to fall into the wrong hands. Why? It looks like a so-called coffee table book (lush photos, oversized format). It would be a shame if it ended up on, well, coffee tables, to eventually be covered with old magazines or used as a handy coaster or, in better circles, to perform a merely decorative "house beautiful" function.It deserves to fall into better hands, specifically those of your favorite vegetable-growing friend or relative. Plenty has been written about Monticello, its architecture and beautiful grounds. This book is about Thomas Jefferson's vegetable gardens.Might you be interested in what varieties of lettuce Jefferson grew? What sort of insects attacked his crops? How he saved seeds and swapped them with his neighbors? Then this book is for you. You may never live in a house like Monticello, but you can put its vegetable varieties on your table.The book is divided in two. The first half focuses on Jefferson's interest in gardening and the development and restoration of the Monticello gardens. It presents a well-researched look at the state of American horticulture in the late 18th and early 19th centuries. The author, Peter Hatch, Director of Grounds and Gardens at Monticello, also pays homage to the African-American slaves whose labor built Jefferson's gardens and whose own garden plots often supplied the big house.The second half is a detailed look at many of the vegetables grown in the gardens, including cultural information. It is here where Jefferson's passion for experiment becomes clear. He was always trying new seeds, such as varieties of corn brought back by the Lewis and Clark expedition.