Free Downloads
Killer On The Road: Violence And The American Interstate (Discovering America) 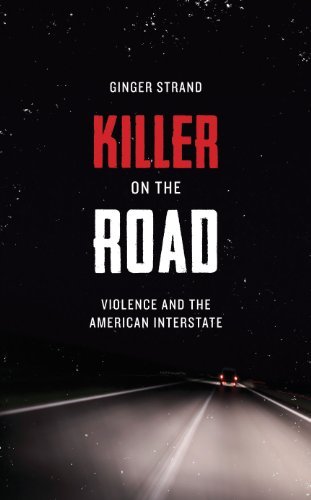 Starting in the 1950s, Americans eagerly built the planet’s largest public work: the 42,795-mile National System of Interstate and Defense Highways. Before the concrete was dry on the new roads, however, a specter began haunting them—the highway killer. He went by many names: the “Hitcher,” the “Freeway Killer,” the “Killer on the Road,” the “I-5 Strangler,” and the “Beltway Sniper.” Some of these criminals were imagined, but many were real. The nation’s murder rate shot up as its expressways were built. America became more violent and more mobile at the same time. Killer on the Road tells the entwined stories of America’s highways and its highway killers. There’s the hot-rodding juvenile delinquent who led the National Guard on a multistate manhunt; the wannabe highway patrolman who murdered hitchhiking coeds; the record promoter who preyed on “ghetto kids” in a city reshaped by freeways; the nondescript married man who stalked the interstates seeking women with car trouble; and the trucker who delivered death with his cargo. Thudding away behind these grisly crime sprees is the story of the interstates—how they were sold, how they were built, how they reshaped the nation, and how we came to equate them with violence. Through the stories of highway killers, we see how the “killer on the road,” like the train robber, the gangster, and the mobster, entered the cast of American outlaws, and how the freeway—conceived as a road to utopia—came to be feared as a highway to hell.

I have just finished _Killer on the Road_, which I read from cover to cover without stopping. It is a rather short book given the nature of its thesis and I was worried that the brevity would mean that it lacked depth. I bought a copy for two reasons: first, I read a lot of books in the True Crime genre because of being close to five murdered people, because I want to understand the act of murder better; and second, because of the review of this book by the New York Times yesterday.Now that I am done with it, I am pleasantly surprised how it covered a rather wide array of threads and pulled them together to make a coherent and believable narrative. I put it down wishing that it were longer - something I can not say about a lot of books these days. As a retired academic, I am very impressed by the work. The author presented and supported her thesis well, and wrote just enough to do that and not a word more. As someone who has suffered the torture of grading undergraduate essays and peer-reviewing journal articles, I am impressed at this feat of prose construction. This is superlative writing.The book also contained insights into already-familiar serial killers that this jaded consumer of True Crime books did not expect. For example, the saga of Edmund Kemper is one I have encountered several times. I expected that the author would have little new to add to all the Kemper reporting already published. I was wrong. The author engaged my interest and kept it by presenting Kemper within the context of America's car-centric culture in a narrative that eschewed sensationalism.I do have some quibbles. I'm not sure that examples like Kemper really belong when compared to more mobile interstate killers.

I think the mark of great nonfiction is to deliver a content that validates something people have always suspected, but have never taken the time to think through. This book does that to an impressive degree. Strand, who admits she is a research freak, shows us (through relentless digging for the facts), how the interstate road system created a fertile playground for serial killers. It became a killing field where they could ply their trade. She says that certainly serial killers had long existed, but the road system provided them with what they most needed - anonymity, mobility, and huge numbers of trusting hitchhikers.Strand has actually two books here. She has a history of the the highway system and how it came to be. She dispels myths about their being built for military purposes, that they were built to move military hardware from one side of the country to the other and to make one mile of every five was straight to accomodate the landing of planes. Not true. It first failed to pass because of the huge price tag. When they converted it to a "defense bill" it passed.So there is a marvelous education on just how highways were planned and constructed and how they affected both cities and small town America. She discusses sociological impacts, too, and the reflection of all of this in pop culture, from James Dean to The Doors' song, "Killer on the Road," which inspired the title of her book.She tells the full story of many serial killers who worked along these highways, many of whom killed hitchhikers and then blamed their victims, saying "they shouldn't have been out there on the road like that."This is a beautiful book in that it provides a nostalic look at how roads were sold politically and socially.

Serial killers are our modern bogeymen, since the 1950’s not a decade has gone by without the name of a serial killer marking both the literal and psychic landscape, their rage has become our voyeuristic rage. For every action there is an equal and opposite reaction. The highway system is the ligature that connects this country and has hastened the advent of mass travel, communication and delivery of goods across the country, it was proposed and built during Eisenhower administration of the 50’s. Do you see the connection between the rise of era of serial killers and the highway system? Ginger Strand does and in “Killer on the Road: Violence and the American Interstate” she explains that one of the unintended consequences of the highway system was to abet serial killers and isolate the most at risk groups on whom serial killers prey.Strand juxtaposes the building and expansion of the interstate highway system and some of the more sensational serial killers of the past 50 years and how the interstate system helped in their crimes. Starting in the 1950’s Strand starts with the spree killings of Charles Starkweather and Carol Ann Fugate, who didn’t technically use the interstate system, were the first highly mobile killers, committing their murders and jumping into their car or stealing an available one they would take off on the country roads to their next crime, it was shocking on a number of levels and caught the attention and frightened the nation.Reading “Killer on the Road” ones become aware of the long litany of names of serial killers that have affected our culture and why. She identifies three reasons the interstate highway system has abetted serial killers in their ability to find victims.