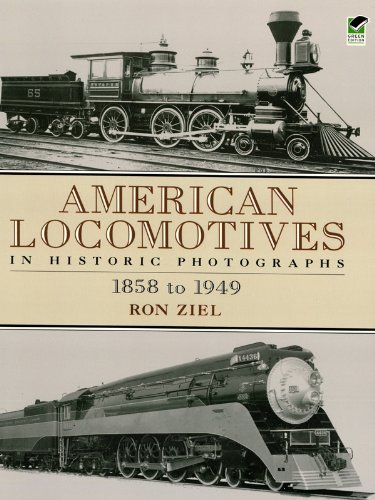 This rare collection of 126 "builder portraits" of American locomotives offers an exciting cavalcade of images that chronicle the momentous rise of steam locomotive power in America. Builder portraits are especially prized by railway historians because they are the exacting official photographs of new models taken before repairs, alterations, and weathering altered their original appearance. The builder portraits reprinted here were selected from the William A. Rogers collection, a priceless archive of images documenting the history of American steam locomotion from the pre–Civil War era to the mid-20th century. While the accent in this book is on the oldest and rarest photographs in the Rogers collection, many modern portraits are included as well to demonstrate how highly developed the American steam locomotive had become before the advent of dieselization. Among the engines depicted are the España, a diminutive model built for the Spanish government in 1858; engine no. 216 of the Pennsylvania Railroad, a "fearsome apparition of Gothic character" built in 1861; the Chimbote Emilia, an inspection engine built for railroad company officials in 1868 that is considered a masterpiece of the engine builder's art; and a Union Pacific 1940s' "Big Boy," the largest and heaviest type of steam locomotive ever built.Clearly, builder portraits are the most revealing record possible of the evolution of the American steam locomotive. This rich selection offers railroading historians and enthusiasts a peerless record of a great age in railway history. Railroading expert Ron Zeil's introduction and captions provide readers with a brief railroading background, a commentary on the art of the builder portrait and key details on each locomotive depicted.

If you want to acquire a collection of photographs tracing the entire history of American steam locomotive development, this is the book. It is limited to builders' portraits, and has no photos of locomotives "in action". The book is chronologically organized, and photos are chosen to illustrate the different types of engines produced, with many pictures of rare and one-of-a-kind designs, like the 2-8-8-8-4T. Some engines built for foreign railroads are included, as are elevated-railway locomotives. A great picture book.

In the early development of locomotives, few photographs exist prior to the 1860s. Ravages of time and the fragile nature of glass negatives eliminated many photographs and some only exist today as third generation copy negatives, devoid of most details. However, through the collection of Mr. William A. Rogers' builder photographs, we can witness the details of the original locomotives as they rolled of the production line. Historically, builder photographs are important because the photos documents the locomotive "as built" by the locomotive manufacturer. Because almost all locomotives were altered during their lifetimes with the addition of equipment or the repair of equipment with parts from other locomotives, these builder photos represent a snapshot of the original configuration of the manufacturer.The Rogers collection illustrated in "American Locomotives" are "builder portraits." Customarily, one engine from an order was selected as the "official portrait" and was usually a side view or a partial view of the front showing the driving rods in a lowered position and no escaping stream or smoke. According to the author, almost all official portraits were taken in low light or on cloudy days. "American Locomotives" presents both old and rare locomotive builder portraits from the Rogers collection as well as later versions of locomotives that ran in the 1940s and 1950s. The author has managed to research the locomotives illustrated in the book and add a short note describing each locomotive. The one short coming of this book is that the reader is often left begging for additional information about particular locomotives, but that is what the reference section of libraries are for. Overall, the book "American Locomotives" is an outstanding addition to any train buff's collection.

There are a lot of interesting photos shot by the builders. Some of them are real oddities and worth seeing. I prefer real engines in operation as a number of these were modified when put into use and never used as portrayed.

This is a good book for some steam locomotives. Then talkling about steam locomotives, it is so hard to get one book with all the different types. This is like so many others, it fills some gaps the others didn't have.

I really like this book when I consider that this is an illustrated book that does not go very deep about the technology and engineering about steam locomotives. The photos are great and many of them are from the first half of the 20th century so they are of very good quality. The photos of the last steam locomotives are beautiful, those iron monsters were really impressive.