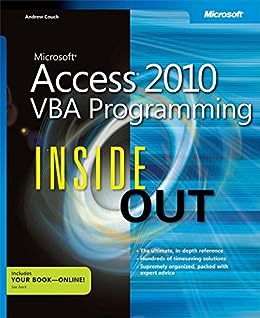 You're beyond the basics, so dive right in and customize, automate, and extend Access—using Visual Basic for Applications (VBA). This supremely organized reference is packed with hundreds of time-saving solutions, troubleshooting tips, and workarounds. It's all muscle and no fluff. Discover how the experts use VBA to exploit the power of Access—and challenge yourself to new levels of mastery! Enhance your application with VBA built-in functions and SQL code Use the Access Object Model to work with data in forms and reports Manipulate data using SQL, queries, and recordsets with Data Access Objects (DAO) Create classes for handling form and control events Connect your Access database to different sources of data Effectively plan how to upsize an existing Access database to Microsoft SQL Server Dynamically update Microsoft Excel spreadsheets from the database Migrate your Access database directly to the cloud using SQL Azure

As a reasonably experienced VBA programmer I have acquired a long succession of Access manuals that for me have have never really met their aspirations. This book is different. It assumes from the start that you are experienced with Access or serious programming so no space is wasted dealing with trivialities, nor does it presume to force the reader into a prescribed way of working. The more one works through the book the more one appreciates the immense variety of different approaches and techniques that are covered, and this is achieved with a clarity and conciseness that belies the complexity. In its 700 pages in contains far more real meat than most books offer in twice the volume and it is hard to find a serious Access programming topic that is not addressed somewhere. The downside of that conciseness is that to start with it can take a while to track down what one is looking for, and one may also have to look at the downloadable companion code to see the detail for a particular issue, but once one has got used to the way the book is structured this ceases to be a problem. Looking at those areas where I have a particular expertise I could not quarrel with the way they are presented, and browsing more deeply I have discovered valuable ideas that I can use immediately. But equally importantly the book addresses emerging concepts and alternative techniques, and thus the book provides the impetus and resources to move forward into evolving technologies. For the serious VBA programmer this has to be the reference book of choice.

Access 2010 VBA Programming Inside OutNot having reviewed a book before, my first thought was to search the book quickly for solutions to the last 4 problems that I had encountered that were outside my comfort zone. I am delighted to say that the code for 3 of the problems was available within the book and, with very good notes, immediately comprehendible. Better still, the index was sufficiently detailed to go straight to the code and the explanation. The 4th - programming for Pivot Tables - was not mentioned but I have no idea how many people wish to make use of this facility.I then started at the beginning and read through the whole book apart from the section dealing with Azure and access to the Cloud which are too much out of my client's current requirements to spend too long on. However, I am just starting an upgrade from Access 97 to Access 2007/SQL Server 2008 and anticipate that the sections 14 and 15 (Using SQL Server and Upsizing Access to SQL Server) will be most useful.Overall the text is clear, the coded examples are sensible, well annotated and easy to follow, the font used and the general presentation are excellent. That being said, this is not a manual for the novice but a far more effective and extensive VBA reference manual and an essential complement to the Microsoft Access Inside Out manuals.

I am impressed with the information. It does require a little more knowledge of VBA, however, than just walking into this with no knowledge at all. Two things to look at before getting into this book:1) The first two videos of the "Wise Owl Tutorials" video series on VBA. These are done for Excel, so after the first two videos, the language is different. However, the incredibly well presented information on the syntax and layout of programming in general (specific, in this case, to VBA) is completely invaluable. Also, it is worthy of note that the VBA Editor window is identical on ALL MS Office products. Here is the playlist: https://www.youtube.com/playlist?list=PLNIs-AWhQzckr8Dgmgb3akx_gFMnpxTN5 (several of the videos are good general info that will be helpful, so you don't HAVE to stop after the first two! :) )2) You MUST understand the naming conventions that are used in this book! It will COMPLETELY lose you if you don't know a LOT about Access and the naming conventions that are normal. The best and most complete list of normal naming conventions for Access has been assembled by "Reddick", and can be found here: http://www.xoc.net/standards/rvbanc.aspEnjoy this book! With the examples you can download from MS (referenced on the back cover and inside), you can practice and learn very well. This is good!

I am a certified MS Access 2003 developer and needed a book to help with my clients wanting to upgrade the apps I had written for them. This book really had a wealth of great information. I have dozens of sticky notes on it marking areas that I could use in current projects. I also appreciate the downloadable PDF version of the text and code samples ready to copy into my modules. After scanning the book so I knew what was in it, I have used the PDF version to search for things the most.

This book provides exactly what the Product Description sets out. It covers a huge amount of ground in a very concise way. You will need some experience of using Access before tackling this book and you will need to work through the sample code in a methodical way - but put in the effort and the book will deliver knowledge that would take several weeks of training courses to deliver - at a fraction of the price! Even people who have been programming in VBA for many years are likely to learn something new (I certainly did), especially as the book provides an introduction to Azure.