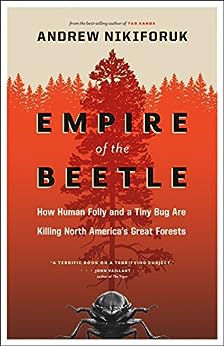 Beginning in the late 1980s, a series of improbable bark beetle outbreaks unsettled iconic forests and communities across western North America. An insect the size of a rice kernel eventually killed more than 30 billion pine and spruce trees from Alaska to New Mexico. Often appearing in masses larger than schools of killer whales, the beetles engineered one of the world's greatest forest die-offs since the deforestation of Europe by peasants between the eleventh and thirteenth centuries. The beetle didn't act alone. Misguided science, out-of-control logging, bad public policy, and a hundred years of fire suppression created a volatile geography that released the world's oldest forest manager from all natural constraints. Like most human empires, the beetles exploded wildly and then crashed, leaving in their wake grieving landowners, humbled scientists, hungry animals, and altered watersheds. Although climate change triggered this complex event, human arrogance assuredly set the table. With little warning, an ancient insect pointedly exposed the frailty of seemingly stable manmade landscapes.Drawing on first-hand accounts from entomologists, botanists, foresters, and rural residents, award-winning journalist Andrew Nikiforuk, investigates this unprecedented beetle plague, its startling implications, and the lessons it holds.

What I liked most about this book is the last chapter and the broader message on tipping points, critical thresholds, and quick catastrophic, irreversible changes in ecosystems. The books is an easy, entertaining read full of interesting characters, although at times I found it a little full of cutesy metaphors and sexy sounds bites.What I liked least about the book was some of the information was incorrect and could not be verified. The worst offender for me was the statement that bad science led to fire suppression for decades. It is unclear to me how science led to fire suppression policies in the first half of the 20th century - that was public sentiment at the time and management decisions and politics. We (people/the public) wanted to save forests and trees for the future. It wasn't science that created Smokey the Bear. At the time, we didn't realize the critical role that fire plays in many ecosystems - we've since learned about the role of fire and public perception is (slowly) changing about wildfire. We now know that wildfire is a natural and necessary part of many ecosystems. SCIENCE taught us that and is responsible for our changing perceptions. Science has changed our understanding and led to this change in perception; I don't see how science was responsible for fire suppression in the first half of the last century.Some examples of other issues I had with the book were:- The statements around woodpeckers increasing 85-fold in bark beetle-infested stands and 12 woodpeckers feeding on one tree. I could not confirm any numbers close to this. A fair bit of research has been done on natural enemies of MPB, including woodpeckers. Many woodpeckers in conifer forests are territorial and so their numbers don't increase to such extreme levels.

We may be stewards of the Earth, and responsible for its care, but we aren't qualified for the job, for we just don't know enough about what we are supposed to be doing. There are plenty of arenas that would show this to be true, and Andrew Nikiforuk has latched on to an important one. He's a journalist who has written about ecological issues before, notably about plagues and scourges. His current book is _Empire of the Beetle: How Human Folly and a Tiny Bug Are Killing North America's Great Forests_ (Greystone Books), and it is an eye-opener, not just about how much damage bark beetles are doing but on how much humans have laid the table for the bugs' banquet. The whole episode ought to instruct us on how to do things better, and there are lessons which Nikiforuk includes, if those who are in position to manage decisions about the forests are listening.Climate change is happening; it is peculiar that there has been such a willingness to deny it for decades, but even skeptics are having to acknowledge that the globe is warming. The bark beetles described in Nikiforuk's book have always chomped on trees, but the warming in Alaska and Canada made it easier for them. The heat stressed the trees by making them too thirsty, and it enabled the beetles to mature in one year rather than two. These are not bugs that are big or fancy looking; they are nondescript brown characters and they are about as big as a grain of rice. They do their damage by their numbers, and they are currently playing the numbers game very well. Besides the warming, the beetles have profited by fire suppression. Trees on fire mean loss of logging income, or loss of a healthy green vista, so we deemed fires bad, when actually they have played a role in the long-term survival of forests.

EMPIRE OF THE BEETLE provides, in my view, a rather enticing panoramic view of the spread, impact and consequence of beetle infestation of North American conifer forests. Speaking as a general reader whose knowledge of entomology and forest ecology is that of an interested amateur, reading this book left me with a better understanding of the phenomenon of beetle infestation, which is neither new nor unprecedented.I came away from Nikiforuk's exploration of the topic with an appreciation of the fact that beetle infestation is a natural occurrence that, as with naturally occurring fire, helps maintain the long term health of the forest (although we humans are so short lived that we view the natural thinning of forests as disasters), and that there is precious little we can do to deter the destruction of our conifers by these tiny critters. In fact, the author maintains that many of our efforts are more detrimental than beneficial to the very forests that we are trying to save.Much of what Nikiforuk has to say is, I would think, fairly common knowledge: that the human urge to suppress forest fires has resulted in overgrown, uniform forests and that these are particularly susceptible to "correction" by some other natural agency--such as bark beetles, and that the climate change the earth is noticeably experiencing is enhancing the ability of beetles to reproduce and spread more rapidly than they otherwise would. To his credit, the author does not diverge from his topic into a debate as to whether or not human activity is behind the current global climate change; he merely acknowledges the fact that average temperatures are indeed increasing, a fact that empirical observation has already thoroughly verified.