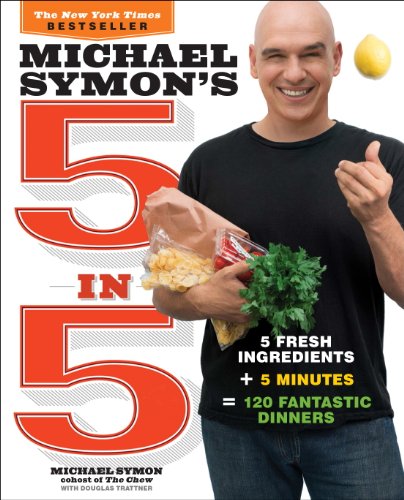 Cohost of The Chew and Food Network Iron Chef Michael Symon shares 120 superfast easy recipes for busy cooks--perfect for weeknights.With his boisterous laugh and Midwestern charm, Michael Symon has become one of the most beloved cooking personalities on television. For ABC's The Chew, he developed a brilliant, simple formula to help home cooks pull together fresh, from-scratch meals on weeknights: a maximum of five fresh ingredients that cook in five minutes. This cookbook ties into the segment, featuring dazzlingly quick, satisfying dinners that the whole family will love.     Michael first teaches readers how to set up their pantries with essentials that make whipping up dinner easy. Then he shares 120 recipes for pastas, skillet dinners, egg dishes, grilled mains, kebabs, foil packets, and sandwiches illustrated in 75 photographs. This is streamlined cooking for busy families and firmly solves the "what's for dinner?" conundrum for home cooks everywhere.

This cookbook has been great. I love that he gives you a list at the beginning of items to always keep on hand in the pantry (olive oils, balsamic vinegar, pasta, etc.). It made it quick and easy for me to get what I need to stock my pantry. After that it was just picking up a few fresh ingredients for each meal. And they've been YUMMY. :-)Also, I met him at a book signing for this cookbook last week. Awesome guy. An elderly woman came up to have her book signed and she had a print out from the Internet of a recipe of his. She told him it didn't come out very well! LOL He actually went through the whole recipe with her step by step and discussed with her what to do. And he wrote notes on there for her! Sweetest thing ever. I mean, cute guy who cooks AND is super nice to old ladies? I'm in!

I like this cookbook. I cook from fresh ingredients almost every day. I bought the Kindle edition and use it with the ap on my kitchen computer.5 in 5 is very straightforward, uses ingredients that can be found at any grocery store and the preparation instructions are clear. My teenaged children love to cook dinner and this book is ideal for them. Not too many ingredients, no elaborate preparations or complicated spice blending or marinades. The dressings are simple, substitutions are offered, so you can use what you have on hand and still make something good. There's even a section of food pairings and combinations that feature what tastes good with what - that's really good for creating new dishes based on something you've done before. I'm wanting to try some of the sandwich combinations, grill recipes and definitely Symon's version of Chicken Marsala.

As one of the cohosts of The Chew, Michael Symon does a regular segment called 5 in 5 where he takes 5 ingredients and is challenged to make a delicious meal in just 5 minutes. Thus the concept of this new cookbook was born.I've made a couple meals from this cookbook and while they always take longer than 5 minutes (I mean, who is lucky enough to have prep cooks to get all your mise en place ready for you?), Symon even cops to that in the book saying, "The key is to relax, have fun, and cook more. If it takes you 6, 7, or even - gasp! - 8 minutes, so be it. In the end, you will still end up with a delicious, made-from-scratch meal that costs less than fast food, tastes a million times better, and is healthier for you and your family."You'll also notice in the cookbook that sometimes recipes go beyond 5 ingredients. Again, 5 in 5 is more of a guideline than a rigid rule.The recipes in this cookbook are all mouth-watering and full of flavor. Probably my favorite dish I've made so far is the breaded pork loin with apple salad because, as with almost all of Symon's recipes, the key is to create a balance of flavors and textures. Instead of pairing the meat with a heavy, starchy root veg as most Americans tend to do, Symon always prepares his sides with something bright, acidic, and/or crunchy.The draw of 5 in 5 is certainly the idea of making dinner with little time and few ingredients, but Symon has gone beyond making dinner work, he also makes it delicious.

I love The Chew and am a Michael Symon fan to begin with, so I was excited when I heard about this book. Seeing some of the recipes on the show was fun too, so I pre-ordered one. It got here on Tuesday, 9/3 and we cooked from it that night - it was SO good (no bake mac & cheese). I decided to send one to my son, who has his first apartment while attending grad school. He sent me a picture (p. 196 grilled flank steak w/corn & arugula salad) that looked just like the one in the book! If I hadn't known his dishes and utensils, I would've thought he just sent me a picture of the book page ;) Next my daughter made the grilled salmon w/shaved cucumber salad - we used greek yogurt instead of sour cream, but it also was FAN-TAS-TIC. We are doing the grilled peaches w/ice cream tonight. My daughter is usually very timid about cooking herself, but for her 18th birthday this week, I'm ordering her a copy for herself. If you have to start with one cookbook, I recommend this one. Thanks, Chef Symon for an easy to use, delicious and fun to read cookbook.The only suggestion I would make is to sell it spiral bound, but that's just my preference ;)

Although has changed alot over the last couple of years (more expensive shipping), I paid for regular ground shipping and got this cookbook in two days and for $8.00 cheaper than retail stores!!! Can't ask for anything better! As for the cookbook itself...it is Awesome! I love Michael Symon's 5 in 5 recipes. I've tried several and they are no fail and once you have done the prep work, it literally can be cooked in five minutes! Great job Michael!!!

If you like The Chew "5 in 5" segments, Michael Symon, and cooking, I would suggest getting this book. The recipes seem to be very easy and one can substitute ingredients to make the meal "user" friendly. The cooking instructions are also "user" friendly. Symon makes food preparation fun.

Best cookbook ever! Lately, I don't buy hard copies of cookbooks because you can usually get everything over the Internet or from TV. In addition, most cookbooks only have a few recipes that I would actually attempt to make usually because they are too complicated or involve ingredients that are too sophisticated for a typical family. Until THiS BOOK! I received my book from yesterday and couldn't believe it. I kept turning page after page and was like, "I'll make that, and that, and that...". I honestly didn't see one recipe that I will not make at some point in the next year...simple to make with ingredients I already have on hand. I am so glad I bought this book and plan to give many copies as Christmas gifts this winter. Michael Symon does it again!!!